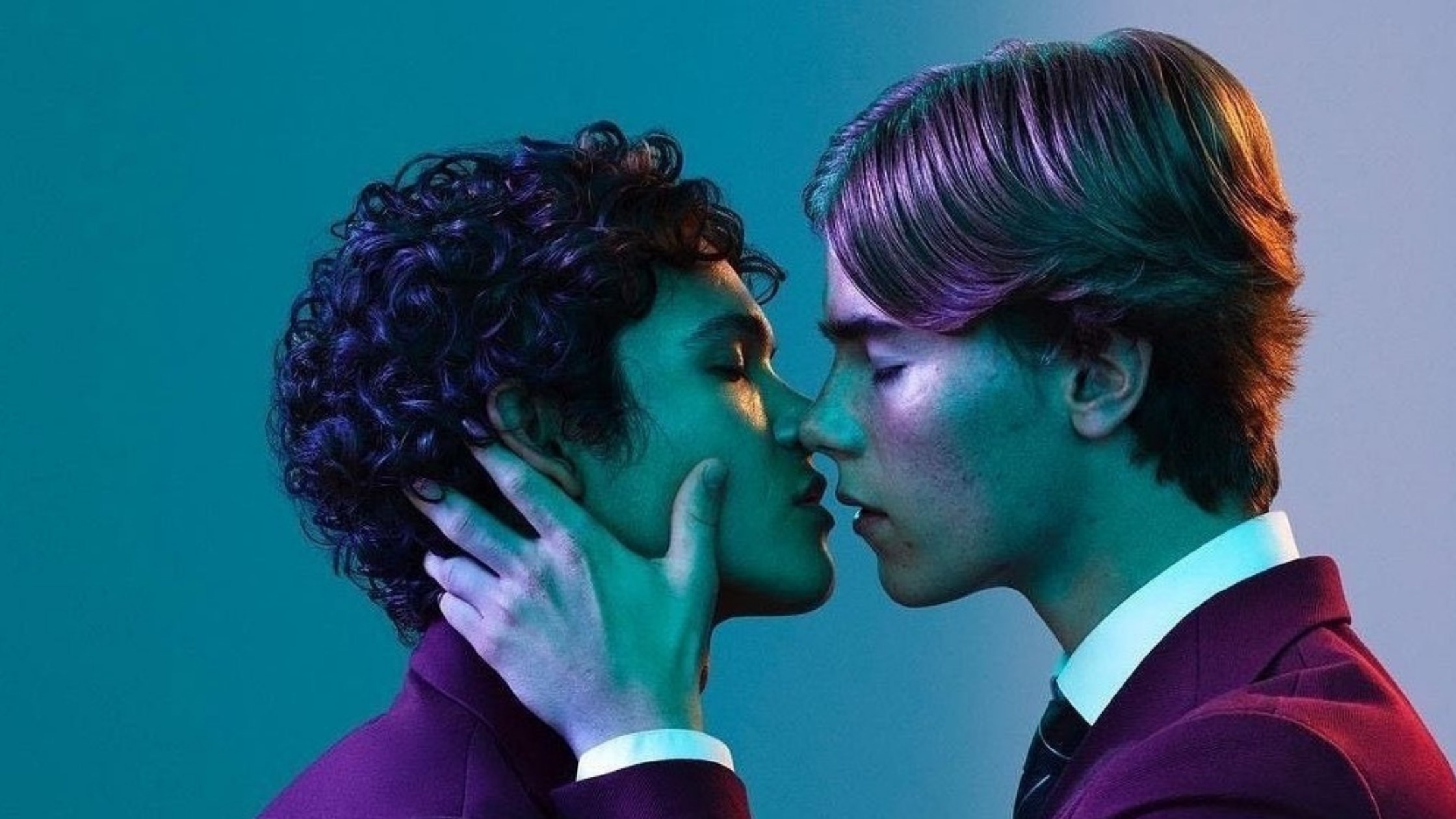 I have never really reviewed a non-Asian drama show on this platform. This drama was able to do in 6 episodes what some dramas try to do with seasons. From the very first episode, you immediately connect with the characters and you feel like you have known them forever. This drama while it is fresh and mind-blowing is in no way a new idea. It employs tropes and cliches that we see in a lot of teen dramas but re-presents in such a way that you feel so emotionally invested in the characters and their lives because it in some way seems similar to yours. I will go into detail in this review (BEWARE! CONTAINS SPOILERS)

Sweden is a country to my knowledge that have good LGBT rights laws in place. Some research has even shown that a larger percentage of Swedish people believe and respect those rights. Which is really sweet compared to other parts of the world.

Another disclaimer! As I am not a member of the LGBT+ community, I believe that my review of this drama might not capture certain elements of hesitation and identity understanding of the characters. I did notice some of it but I do not think I am equipped enough to delve into that. So I will attach THIS LINK to a reactor from the LGBT community. Follows Prince Wilhelm who has just been enrolled in an elite boarding school, Hillerska after he was in a club brawl. At the school is where he meets Simon. He explores his sexuality and eventually falls in love with Simon. He then had to choose between love and duty.

I will highlight specific points because they really encapsulate the beauty that this drama actually is.

I have always held the opinion that diversity should not be forced and shouldn’t always be about race. It should be about representation and identity. Hillerska is an international bordering school where the wealthy send their children. So it is easy to imagine that students will come from different parts of the world that means, different cultures, different body types, hold different ideals and so on. Being rich is not their whole identity.

We had neuroatypical characters like Sara who is diagnosed with Aspergers (more interestingly, the character is played by Frida Argento who also has Aspergers). We had Simon who is a biracial character. At home, he speaks Spanish with his mother and you could see that he had a close relationship with his mother and sister. His relationship with his recovering alcoholic father was also explored. I mean the beauty of this show was that in 6 episodes it made sure that every main character was properly explored.

Another thing a lot of people seem to love is the acne. I mean I was shocked, especially in a show with Royalty and the elite, you would immediately imagine perfection. This immediately brings me to the perfect casting. The characters are played by actors that look the age, which means they have acne that is part of teenage years. In fact, Edvin Ryding who plays Prince Wilhelm was actually 17 years old at the start of filming. PERFECT FUCKING CAST!

The writing is fucking genius. Everything in a scene was so well thought out and planned. I mean, take for example the continued use of social media. Everything started with a viral video of Wilhelm fighting in a club to him meeting Simon and then stalking him on social media then to August posting their video on social media. While the world in this drama might seem foreign and almost unreal, it contains and maintains a touch of our present reality and the position that social media holds with the current generation. Specifically, the generation that falls within the age bracket of the characters.

Everything was deliberate and necessary. There were no unused story arcs, nothing was forgotten. Another example was Alexander getting suspended for possessing drugs. His suspension got the ball rolling, he could not open the window for August which led August to Wilhelm’s window where he saw Wilhelm and Simon having sex. This continued into Wilhelm having to protect Simon that then led to August sharing the video. Everything was necessary and important!

I just think is genius writing to be able to completely eliminate unnecessary plot points and story arcs. We knew our main characters and they were invested in. Side characters became important when necessary, they were not just used to fill plot holes.

I know a lot of people watch the show for Wilhelm and Simon which is fantastic but we can all agree that we detest August. From the very first scene, I couldn’t stand him. He was just so over the top. As the episodes continue, August continued to be an annoying ass. I know he was dealing with some trauma but it gives him no right to be a condescending jerk! I mean I cannot believe the nerve on the guy when he kissed Sara just to spite Felice. Backfired though, love it. (By the way, I will not be surprised if Felice and Sara start dating in season 2 or if August is gay with the number of times he watched the video of Wilhelm and Simon – Creep)

By the way, why was August first impulse to video people having sex, especially when he knew that it was Wilhelm? I will assume that he did not even know at first that it was Simon, he thought Wilhelm was with a girl which would explain his surprise. I just found it weird that the first thing he would think to do was to get a video. He was probably thinking he could use it for blackmail later. Fucking creep!

Felice is another character that I did not like at first but once I got to understand her character and see more of her behaviour, I realised that she was not a bad person. She was the only person that was really on Wilhelm side at the end of the show (aside from Simon). She was the one to let him know what it was August who posted the video. She was a good friend.

I am assuming that Wilhelm has never been into a guy before. The show did not tell us if he was even into girls and I think that was the mystery about Wilhelm. But you could tell from when Simon first kissed him that he had not been with a guy before. He was afraid and panicked. Just when he was accepting and about to give it a try and understand the feelings he has for Simon, his brother dies.

I think it was just writing genius that Erik death marked the halfway point of the drama. His choices and reactions in the first half were different from the second because there was now the weight of the crown on him. He was the spare so he felt he could do or get a normal life (i.e., date Simon without being judged) but the death of his brother took that option away.

A lot of people really loved the field scene. I can understand why it was very cute. The song playing in the background made everything more intense. Wilhelm was high as a kite, confessing his feelings for Simon is just cute. But it was not my favourite scene.

My favourite scene was after Wilhelm released the statement that he was not the one in the video and went to visit Simon. The power that scene has. It was able to explore class imbalance, relationship dynamics and self-respect. The class difference in their relationship; was always Wilhelm setting the tone for their relationship. Since he was always trying to make sure that he does not affect his family and the crown without considering how it would affect Simon. He never did anything out of spite, it was just out of entitlement and honestly, fear. You could see how much the situation was hurting both of them. I have to say it was the peak of their acting in this show and more so impressive that it was Omar’s first acting gig. Wilhelm left in tears and I believe that this was the first time that he finally understood the weight of the crown and the decision he made in picking the crown instead of Simon.

An equally good scene is the last sequence when Wilhelm hugs Simon in front of everyone, tells him he love him and Simon doesn’t say it back. This scene pulled at my heartstrings. It was not that Simon did not love him but because Wilhelm did not choose him. He needed to sort himself out and come back to him. It was so hard for both of them. Simon chose himself and refused to be in a relationship that would mean him hiding.

The soundtrack is absolutely phenomenal. We can all agree that Omar Rudberg (plays Simon) has a fantastic voice. I have been listening to his songs on Spotify.

The intimacy coordinator did a great job. I mean the intensity of their kisses and their steamy scenes was out of this world. I tell you I held my breath at the end of episode 2 when they kissed. It was so intense.

Drugs and addiction was a sub-theme in this drama and I really like the way it was explored especially with Simon’s father and August the creep. Also, Wilhelm seemed to have anxiety and panic attacks, and while it was not explicitly stated, he had all the signs and symptoms of it. You will notice him always using the butterfly hug method anytime he feels panicked or stressed.

The ending of this drama makes so much sense for such a realistic show. People who thought he would come out to the press are just thinking of grand gestures that unrealistic teen drama perpetuate. He did what he did because of his brother and his family. Sure he might have still been a little scared but he really had no choice. If he was an ordinary person then sure but he is the Crown Prince. Simon is right to dump his ass for now until Wilhelm sorts himself out!

I really hope that we get a second season because this show is just as good as SEX EDUCATION. A drama that I think is absolute perfection.

Thanks for reading, I hope you check it out.