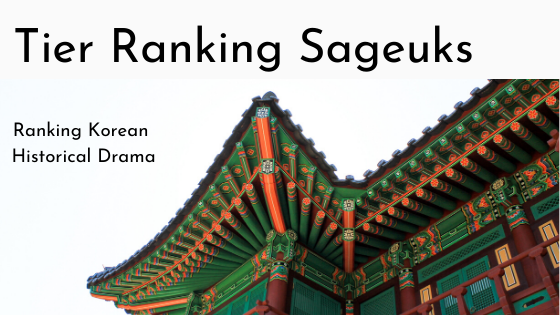 After watching a gazillion YouTube videos about tier ranking, people have ranked food, albums, books, pokemon, and almost anything you can think of. And as much as I have a lot of things to rank, I decided to go with the historical Korean dramas that I have ever watched. Honestly, I didn’t rank all the historical dramas that I have watched, I just stuck to the ones that I could remember at the time.

God Tier ( Unbeatable): These are dramas that no matter how many times I watch it and compare it to newer dramas, they remain the best

A jewel in the Palace

The Return of Iljimae

Rebel: The thief who stole the people

Great (Think about often): There are dramas that once in a while, they pop in my head and I watch them again because of the quality of the story and the characters that I have missed. I highly recommend these dramas.

The Kingdom of the Wind

Emperor: Ruler of the Mask

The moon that Embraces the Sun

Love in the Moonlight

Good: These are good dramas and I would probably recommend, most of them fall in the comedic category, and there was no intense political or historical background like the ones in the God Tier

Alright (I don’t hate it): These are fun dramas, lacked the intense comedy present in the Good Tier, might not recommend it but I might watch a few scenes that I enjoyed again.

My Country: The New Age

Arang and the Magistrate

Forgettable (Could have done without it): These are dramas that I almost forgot that I had watched because they left little to no impression. I definitely won’t be recommending these dramas but they all focus on some I can’t live without your love shit.

Mirror of the Witch

The scholar who walks the night

My only love song

The King in Love

If you are interested in making you own, here is a link: Tier Ranking Korean Historical Dramas