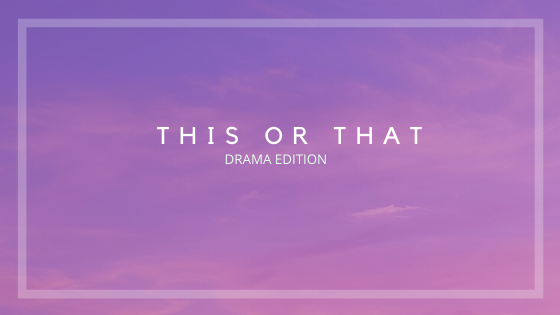 Today I will be attempting to recommend you new dramas based on a few that I think are a lot of people favorites. Some of these dramas you might have never heard of but I hope that with this, you will check it out. Most of these dramas are on Netflix and if you are unable to find them there, then check Viki, it most likely would be there.

These dramas although very different in their own right, do have elements that tie them together, say, for example, the main character experienced some sort of traumatic past that has made them twisted e.t.c. Without further ado, let’s get into it

Something in the Rain === Find Yourself: The first is a Korean drama that centers around the age difference between a younger guy and an older woman. They both fall in love but their love isn’t accepted by the woman’s family and it sort of becomes the major issue we follow throughout the drama. The same is with the second drama which is a Chinese drama, I can’t rate one drama better than the other because they are just both so good, similar but very different atmosphere and intensity.

Two Worlds === Extraordinary You: Both Korean dramas that center around parallel worlds (not universes), here one world is inside a webtoon and the other is the real world where the webtoon creator exists. In both worlds, we follow the daughter of the writer who can travel between both worlds when the main character is in danger. This is very similar to what is in the Extraordinary You, except here we happen to remain in the webtoon world, but we go in and out of the consciousness of the characters. They are both soo good, although my easy favorite is Extraordinary You

Hotel Del Luna === Master’s Sun: These two Korean dramas are two of my all-time favorite dramas and they happen to be written by the Hong Hong sisters. Both dramas follow a dark mystical story. In Hotel Del Luna, we follow a lady who owns a hotel that caters to the dead, and her human manager and their sad and painful relationship (I am still sad about this drama). In Master’s Sun, we follow a woman who can see ghosts and she is somewhat haunted by them, this is until she meets an extremely rich guy. She notices that when she touches him, she no longer sees the ghost. She tried everything to get her hands on him (lol). Although a bit scary at times, it is filled with hilarious and rib-cracking scenes.

Sky Castle === Graceful Family: The similarities do not lie in the center of the story but the layers. These two Korean dramas follow the life of the rich, those in the high society that seemingly have no problems whatsoever. In Sky Castle, we see how far the rich would go to get their children in the best universities and how they lose friends and families trying to protect their reputation. In Graceful Family, we follow a rich family who is insanely protected by a security and information company as they try to attain more power over the country while at the same time protecting their dirty family secret. If you like a little bit of Kimchi slapping melodrama, with secrets and tension, then these are the dramas for you.

Crash Landing on You === Kings 2 Heart: I am sure a lot of people would have compared Crashing Landing on You to Descendants of the sun and I see it but a better comparison is Kings 2 Heart. In the first drama, we follow a rich south Korean girl who found herself in North Korea after a parachuting accident. That is when she meets a North Korean soldier who tries to protect her and return her home to S.K. This is similar to King 2 Heart where the south Korean king falls in love with a North Korean soldier after they train together to fight in the united competition. They both have very great side characters that made the drama so much more interesting.

Kill Me, Heal Me === Hyde Jekyll, Me: In Kill Me, Heal Me, we follow a chaebol who has multiple personality disorders, and in different situations his personality shifts to another new person. He falls in love with his psychiatrist. Similar to Hyde Jekyll, Me, here we follow a rich guy who runs a theme park, he has dissociative personality disorder, a personality with a savior complex, the opposite of the main character, he seems to be able to control his change until he meets the new circus master who has a special ability to raise his heart rate. They are both so fun to watch, I don’t know if these dramas are a good representation of the disorder but I do know that they were so much fun.

I will stop here, let me know if there are other dramas that you think are similar, or you think that the drams stated in this post can be paired with something better.