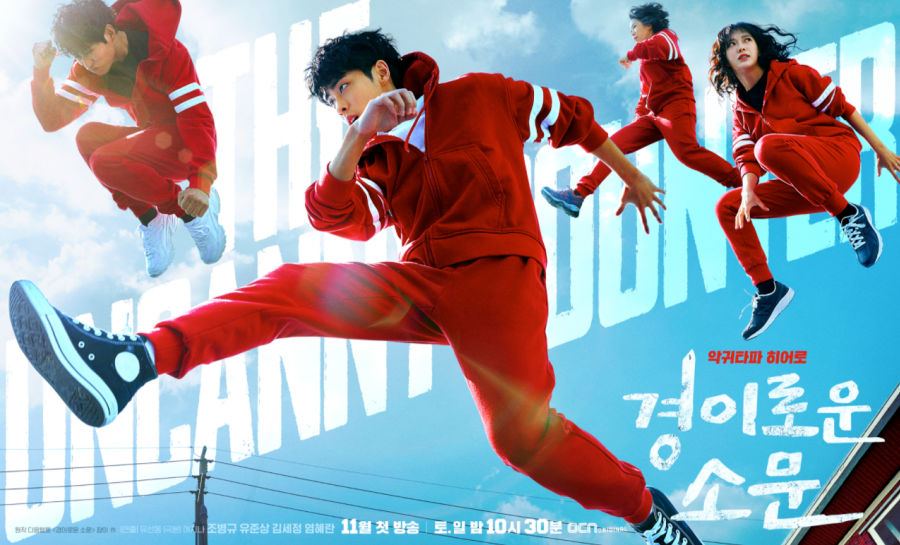 Hello and welcome to review of the uncanny counter!!!

I am so happy that I started this year with this drama. If you have not checked out my post on dramas you need to watch, the link is HERE. Today, I will be reviewing a new favourite drama that has introduced me to a lot of actors that I would be looking out for this year. Also, since the drama was so good, I am hoping for a season two and I have a few scenarios that I believe could be made into a new season with the same cast!!! The Uncanny counter is set in a fictional city Jungjin, following a group of demon-hunters who call themselves, counters. Counters work for the afterlife, making sure that evil spirits do not gain immortality. Evil spirits possess humans and make them do horrible things (kill other people and eat their souls). the more souls evil spirits eat the stronger they are and the harder they are to kill or summon out of their host. The counters themselves have to have been in a coma to be woken by a partner in Yung. But that is not the same with So Mun who is the new Counter after the death of one of the four main Counters in Jungjin. So Mun was not in a coma when the Yung spirit fused with him and this surprised Wi-gen who is So Mun Yung partner.

I will stop there in the synopsis because with this drama, the less you know the better. Everything is a surprise with this drama. All the counters have their backstory and the more you watch the more you are able to disentangle all the mystery. There are a few things I will reveal about this drama and I hope it doesn’t spoil it too much for you. However, there is really no other way for me to explain this drama without revealing specific details.

So Mun is a highschool student, who is crippled because of a car accident that killed his parents. He is living with his grandparents, with his grandmother who has dementia. It was quite amazing to see the research that they put into the portrayal of dementia in this drama. Which honestly is one of the things I like about this drama, the mental health representation. This drama explores bullying and the bitter end of it, suicide, murder, depression and much more.

When Wi-gen possesses So Mun, he is able to get a better understanding of the changes that have occurred in his body at Eonni’s noodle shop. That is where he finds out about counters and what they do. After much deliberation, he becomes a counter and becomes a valuable member of the team.

He soon finds out that his parents’ death was not caused by an accident but they were killed because they were going to expose a prominent man in society. Rightfully enraged, he also finds out the relationship between one of the other counters and his parents. (I am trying so hard not to spoil this drama). Anyways, we follow the counters going as they try to bring in a level 3 evil spirit that has just been killing people while at the same time trying to prevent another man from being president. Trust me, it is a rollercoaster you do not want to miss.

Now for scenarios that I think would be amazing for season two. At the end of season one, we see them sort of travelling around the country to find and send evil spirits to the afterlife. So Mun finally calls himself an uncanny counter.

Scenario 1: There is an evil spirit that is causing the person possessed to serially rape women in his community. However, the counters cannot summon the evil spirit out of the man because they have been fused because of human evil nature. The only way to end the evil would be to kill the spirit and the host at the same time. This would present a dilemma because counters should not kill anyone whilst performing their duties (believe me, it would be so good!!)

Scenario 2: There is a breakout in Yung (oh! this one would be so good), with all the evil spirits that have been banished escaping. They escape and they possess people. Or imagine they all fuse into an ultimate evil spirit. It will be fantastic to see how they resolve that.

Scenario 3: The world finds out about the uncanny counters and everyone is either afraid of them or are all trying to become counters (That would be hilarious)

All the counters almost died at least twice (definitely got your heart in your throat with this drama).

I gave this drama 9.9 out of 10 stars. I removed 0.1 stars because sometimes the graphic was a bit off but other than that, this series was perfection that I want it to continue.

Thanks for reading. I hope you check out The Uncanny Counter!