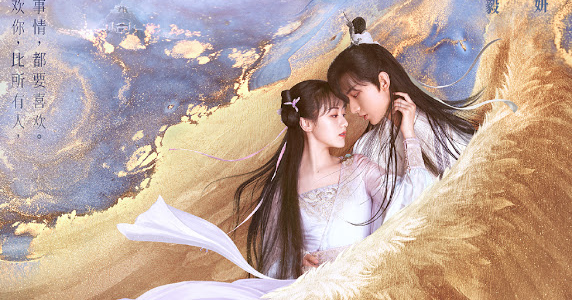 Its been almost 4 months since I watched a Chinese drama, I just could not find enough time and drive to watch and review it. But, I almost by fate came across this drama on YouTube and I could not help but binge it. If you follow me on Instagram, you would have watched my live reaction of the episodes as I watched them.

Here is a LINK to watch it on Youtube, all episodes are available with English Subtitles (unfortunately there are no subtitles in other languages). This will be a long review as I would try to lay a foundation to explain this intricate drama. It is a very complex drama with lots of curveballs and revelations. I will be more focused on the intricacies of relationship between the main characters and how it moves the plot.

A thousand years ago, a battle between the heavenly realms and the then called Asuras lead to the death of The General of the Asura Clan called The Star of Mosha. Claims are he was killed by the God of War, a fierce female fighter of the Heavenly realm. It is said that his soul his sealed in a lamp because it was indestructible, the lamp was hidden away in the mortal realm. In the mortal realm are different (If I remember correctly, 5 Sects) Sects who think it is their sacred duty as cultivators to vanquish demons. In this story we focus on Chu Xuanji born in the Shaoyang Sect. She was born without her 6 senses (that is she cannot taste, smell e.t.c – you get the gist) and Yu Sifeng who is a very skilled member of the Li Ze Palace (Just remember them has a strange group of men who always wear masks and must never fall in love, basically). Yu Sifeng is so skilled, he is the first disciple with a high chance of being the next leader of the clan.

Both of them meet when the Flower Banquet (which is normally held every four years, with a rotation across the Sects) in Shaoyang. The short form of it would be that they met and Si Feng fell in love with her but she obviously could not love him back. (Honestly right from the very first episode, I could tell that the writers knew a lot Chekhov’s gun and maintaining consistency all through the drama – every single thing that came on screen was necessary and important. In the moment, it might seem out of place but once you get to the revelations, the haha moment accompanies it).

An injury leads to them being apart for 4 years, with Xuanji training and Sifeng being pushed by Li Ze Palace, for losing his mask and falling in love! He is forced to put on a new mask, a mask that no one should be able to remove unless they are both in love. When Xuanji and Sifeng meet again after 4 years, its almost like fate is purposefully trying to get them both killed. The Lover’s Curse placed on him triggers when his heart is broken by XuanJi (and boy was it broken, the poor guy almost died – I mean he is almost always dying)

– At this point, I need to state that this review contains spoilers.

Storyline/Plot: I should start this section of the review by stating that this drama is based on the very popular Chinese book series Liu Li Mei Ren Sha by Shi Si Lang (Unfortunately there is no English translation of this series, I wish there was because I would love to read it) and the screenwriting was done by Liu Fang. I would be looking forward to their work because this storyline is unlike anything I have ever watched, read or heard.

Now lets start with the time span, the major part of this drama takes place over the course of a thousand years. We follow Xuanji and Sifeng has they deal with the fact that in this life (most of which the drama takes place in) they are the reincarnations of their first self. They have met during all 10 life times and each time Si Feng has been so unfortunate to cross parts each time and dying as a result of it. I mean, this guy died some many times in different ways that it was just annoying. What in god’s name? You would think that he would avoid her in the 10th lifetime when he found out how their other lives played out. Then you find out about their first lifetime and who he really was (The Son of the Jade King). This leads me to the next section.

Surprises/Curveballs: I want to say for the record that I was always suspicious of the people from the Li Ze Palace but I never in a thousand years thought that they were all demons (Fire Bird Demons) who the Sects thought had been wiped out years ago. The most suspicious person was Yuan Lang, he was the only person who I immediately tagged, the asshole, I expected him to be shitty and I was right. He was the person that started the ‘Sky Hall’ a place when Demons with no control and humanity left have been terrorizing the mortal realm, trying to release the soul of the Star of Mosha. They are hoping that the Star of Mosha would wreck havoc on the all three realms (Heavenly, demon and mortal realms). It turns out that the Star of Mosha has a lot to do with the God of War. Apparently, the King of the Heavenly realm (King Bailing) betrayed and killed his friend, Rahu Ketu (The Star of Mosha) and did some crazy magic and demonic anatomical construction of his body and made Rehu Ketu into the God of War who fights on behalf of the Heavenly Realm. King Bailing sent the God of War to kill the Asuras (remember that the Asuras are the clanmates of Rehu Ketu). I guess it is easy to see how Rehu Ketu’s soul would be bitter and releasing it could definitely be associated with chaos! – While this part of the story might be the curveball, the surprise was with douche number two, King Bailing. Bailing came down to the mortal realm to manipulate Xuanji, who is the reincarnation of God of War, into destroying the soul of Rehu Ketu even when he knew that it could kill her. The most enraging part of it would be that he did it all under the guise of being in love with Xuanji.

In my opinion (Which is the most valid, I don’t care), King Bailing was the villain of the drama. He was worse than Yuan Lang and Wu Tong in my opinion!

Consistent Items: To bring back what I said about Chekhov’s Gun, everything had a purpose. Even the parts with the bad graphics, had its purpose. I could easily tell that if the drama had a higher budget the graphics would have been better but it honestly does not take anything away from the drama. From the first episode when Xuan Ji’s blood floats in the underground secret cave to when Si Feng comes to the realization that it was her blood that calls to Rehu Ketu’s soul in the lamp, to when he pretends to be the Star of Mosha. Everything was just so expertly linked. I think my favourite use of consistent items is the use of masks by the Li Ze Palace members. They could have easily hidden their identity with other means without having to attach the rules of punishment when a member loses their mask. But for consistency and natural story progression, Si Feng losing his mask made him accept a punishment which was climbing something similar to 13 stages of hell, then hearing Xuanji say that she is in love with her Sixth Senior and then finally accepting to wear the Loveless Mask (The Lover’s Curse). What follows is a string of strange happenings that as a viewer I later understood once I found out that Xuanji was the God of War.

Characters & Actors: None of the characters in this drama was wasted. I have to stated that this drama is probably the first Chinese drama that I have watched with so many important characters who actually have their own storyline within the drama. I think the best example I can use is Xuanji’s twin sister, Linglong. Linglong is the temperamental older sister who is always looking out for Xuanji who is always being bullied because of her lack of the 6 senses. Through the drama we follow her from being this sweet temperamental and go-getter to her spirit being broken by Wu Tong who kidnapped her and split her spirit from her body. By the way Wu Tong is an ass who used his being in love with Linglong as an excuse. Anyways, he placed her spirit in another body and made it do all sorts of evil things. When Linglong was finally reunited with her spirit, she was no longer the same, she could remember all the things she had done under Wu Tong’s control and  it took a lot of love and understanding for her to heal and grow. It was beautiful to watch! There are so many characters and I cannot go into everyone of them but just know that everyone had a purpose. The acting was so good. I have watched a number of robotic Chinese actors in the past but this drama felt so real even with the magical elements because the actors were able to pass on their emotions really well. They could not have done better with the cast.

Soundtrack [OSTs] and Ending: I have the soundtrack on replay. I cannot get enough. A YouTube link below for the OST. The ending was everything I wanted and more! To finally see them happy was something that was so hard to imagine considering all the things that had happened to them. Finally, I think the most important question I kept asking myself was this, “could the majority of the problems they faced be solved or would never have existed if Si Feng had been honest with Xuan Ji? Not about him being a Demon but when he found out that she was both God of War and Star of Mosha. He could have saved a lot of his clans men and himself heartbreak if he had just told her the truth. But what do I know. I just never understand why, loving someone would make you want to hide truths from them even if it might hurt them. One would think that is a way to test the strength of your relationship. Si Feng just seemed like a big fool to me. A huge gigantic idiot who was willing to die over and over again for someone who could not love him.

The one thing I hated about this drama was when Si Feng was being called ‘Little Stammer’ because he had a stutter in the first two episodes. When he learnt to control his stutter, he said it was because ‘he was smart’. This enraged me. I was gonna give this drama 10 stars but now that I remember this I am taking the rating down a notch.

Thanks for reading. I hope you check the drama out! You will not be disappointed.