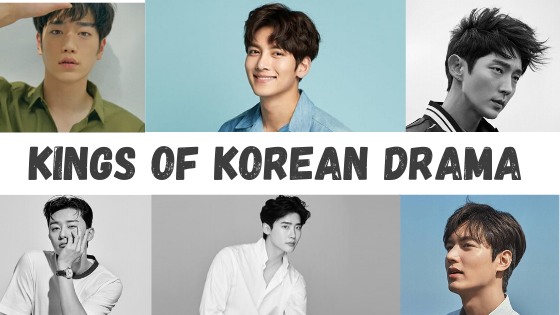 A few months ago, I posted Queens of KDRAMA, and a lot of you really liked it, and even to date, you ask me to make a part two but I am yet to get around to it. for today, I will be focusing on all my Korean drama kings, they make watching Korean dramas worth it. Just like I did with Queens of KDRAMA, I will be listing a few of their works below and I hope you check them out.

It’s 2020 and I have been watching Korean dramas for over 13 years! I can’t believe it. It started with me being so obsessed with TV shows and it morphed into dramas and one day I found myself watching JUMONG, which was one of the first-ever Korean drama I watched. This thrust me into the world of Korean drama and K-POP.

I will only be recommending popular works that I have watched, so in case you see one that you think is meant to be on the list but isn’t. As much as I want to claim that this list is free of bias, I can’t help but say he is my number one, any day all day, I love him so much. He always brings comedy to his acting… there is no way you can watch him acting without laughing, he is just so good at what he does that it is so natural.  He has such a wide range, there is almost no role he can’t play. Oh! I love him *screaming fangirl* I have a whole BINGE||Season 1 Episode 3 (Actor Edition) where I reviewed all the dramas and movies he has ever been cast in. He is one of the most expressive actors on this list when he cries, I become a sobbing mess. Hmm…okay I love him. He is just fantastic, he can be a spy, he can handle a gun, he can jump over fences, he can make your heart beat faster, he can melt your icy heart (okay I will stop now). I love all his action movies but having watched is romantic comedies too, I just have to yell, range!!!!!! I love him (how many times have I said this?). He is one of the Korean actors that I fell in love with when I started watching Korean dramas. the first time I saw him was in Iljimae which is some sort of Korean take on Robin hood. This list would not be complete without this King, he was made extremely popular by playing a rich heir in the cheesiest Korean drama of all time that I love. He has been in so many Korean dramas that I have watched but here are a few that you should check out.

Because I am sure I can go on and on about Korean actors that I love and popular works that they have participated in, I will stop here and list a few others that you can check up yourself

5 thoughts on “Kings of KDRAMA”