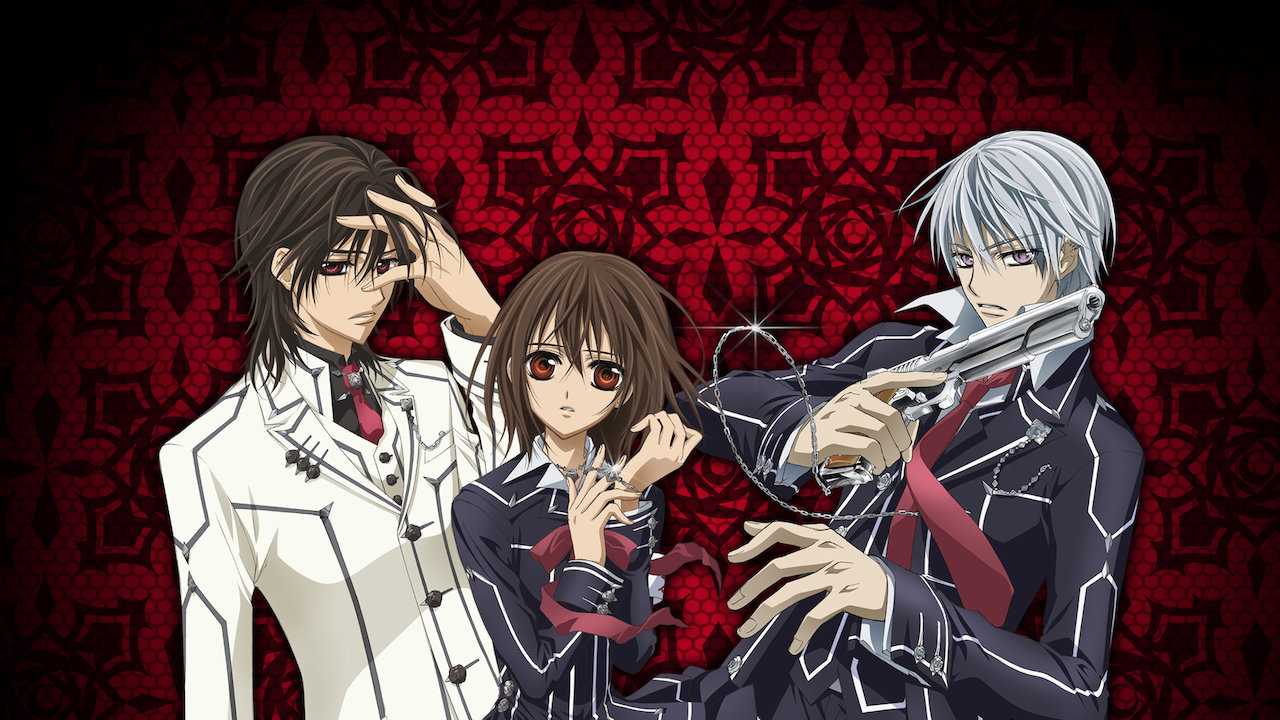 As the title suggest, I will be reviewing Vampire Knight which is an anime that I found on netflix. I honestly don’t know how I came across this anime. I was thinking of calling it J-DRAMA but its not really a drama and it doesn’t fit into the category. I don’t think I have ever watched anime and I heard that Avatar: The Last Air Bender don’t count. Anyways this was a nice surprise for me, I have not made up my mind yet about how i feel about this anime.

This anime is an adaptation of a Japanese manga series by Matsuri Hino. There are currently two seasons up on Netflix and this will be a combined review of the two seasons. For this review, I will be removing the cast section as I was unable to identify the voice cast and also, it doesn’t really matter, for me at least. Also, I tried so hard to find the cover of the Manga but there are so many editions and printings out now that i just gave up and picked one.

At Cross Academy, two student disciplinary committee members are tasked with keeping the peace between a human class and a night class of vampires.

Let me start with the part of this anime that confused and annoyed me at the same time. Yuki who is apparently one of the main characters is 15 years old and the anime is set in a highschool. although i can accept that the vampires might be much older than they look which seems to be a running theme in a lot of vampire related content.

Yuki and Zero (by the way if anime Zero came to life, i would absolutely date him) are the two students in the whole school that know what the night class students really are (by the way, the vampires in this anime can walk in the sun), so they are tasked with keeping the order among the students. so obviously all the human students are fawning over the vampire students (that’s expected).

Yuki was saved by Kaname, a pure blood vampire 10 years ago when she was almost devoured (yes I said devoured, the irritating amount of times this fact was said in this anime, piss me off, its like we watching can’t retain any information from the last few episodes we have watched) by another evil vampire. Anyways, so she has some sort of appreciation and love for Kaname.

Zero also has his own storyline and honestly his is more interesting that Yuki, he is family was killed by vampires 4 years ago and he carries a massive hate for vampires until he is faced with a monster within himself. Saying more will be spoiling it, so watch it.

Now for the really troubling part of the whole story is when Kaname asked 15 year old Yuki to be his Lover. So I don’t know how I feel about this proposed relationship, I have to point out that some scenes in this anime was a bit uncomfortable to watch as it was almost overtly sexual for an anime set in a high school.

Other than my overtly sensitive opinions, I actually enjoyed it being the first anime I have watched. It has made me hungry for more anime. if you have any that you think I could really enjoy, then please let me know about it.

By the way, why does does the voice in Yuki’s head sound like Azula from Avatar the last air bender.

So, in season 2 things got a little weird and we find out the relationship between Yuki and Kaname and you wouldn’t believe it. Trust me that came out of no where. I was cringing so hard that my head hurt. The ending was so anticlimactic and it annoyed me.

Although she was evil, she was killed by Kaname (trust me, not a massive spoiler) and also someone has a twin (Gosh, this is just to much).

I don’t really know I am to rate this anime given the fact that it is my first one, I guess I will rate it like I rate my books, 6.9 out of 10 stars.

Thanks for reading. Have you watched this Anime? Did you enjoy it?