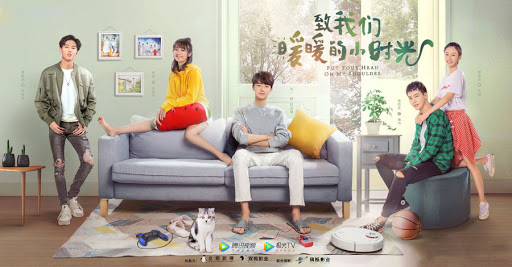 Since I watched my first two Chinese dramas and you guys have really helped with recommending me dramas. This was actually recommended and I am so glad I watched it. I do have to say that although I am enjoying Chinese dramas, there is just something about the feel I get from them, they give me earlier Korean drama vibes, vibes from dramas like Boys Over Flower and Playful Kiss. I don’t mean to compare but I just can’t help doing that when I have watched too many Asian dramas.

Put Your Head on My Shoulder

As Situ Mo’s graduation is nearing, she is confused about her future plans. She tries out all sorts of things all the time and is unable to make her own decisions. Her ordinary days are suddenly shaken up when the genius Physics student Gu Weiyi appears in her life. The two accidentally end up living together and chaos begins.

One thing about this drama that appealed to me was the cast, when i saw Xing Fei, i was suddenly more interested. she was in a drama i watched in 2018 titled ‘Master Devil Don’t Kiss Me’, she was fantastic in that drama and she is fantastic in this drama too.

When i watched the first few episodes, i wasn’t really enjoying it that much, it just felt like every coming of age Asian drama out there. I almost gave up on it but i stuck with it a bit and it got so much better.

Here we follow a girl who is an accounting major in the university but is trying to get into the advertising industry. A coincidence results in her meeting this genius who is majoring in Physics. But more to come with this coincidence is that her mother and his are friends but this is unknown to both of them until they soon realize that they are living together

Gu Weiyi who is unable to form solid emotional relationships because of his high IQ starts to fall in love with her but he doesn’t know how he is going to tell her. this leads to him asking his professor and mathematical genius of a friend to help him confess his love for her but as you can expect, things didn’t go his way. Although writing a mathematical formula or quadratic equation to profess your love his sweet, a simple ‘I love you’ works like a charm.

After I got past the first 10 episodes, it was smooth sailing from their, I thought the drama was fun and although the cast was a little wonky, I will let it go and not take it apart. The story itself was just cute but it just felt like something that I have watched over and over again.

Honestly, anything I say will be a major spoiler, well except that the professor is married to the hall administrator. Not a good spoiler but at least it is something.

Thanks for reading. Have you watched this drama? Can you recommend me any Chinese dramas?