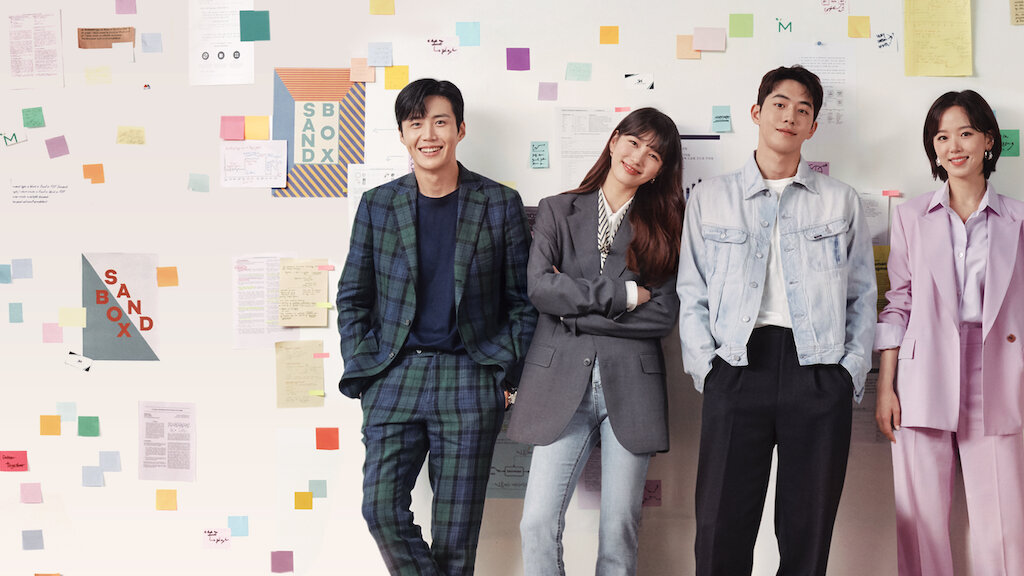 Hello and welcome to another Korean drama review!!

You probably can tell from the title of this post, that I prepared a long rant. While I was not necessarily looking forward to this drama. It was just one of those dramas that had a lot of promise and potential. It was pitched as a drama that looks into the lives of people trying to start a business. BUT, we did not get that! All we got was a silly and unnecessary love triangle. Lack of direction and reasons for love. Honestly, I can go on and on. Set in a fictionalized idea of Silicon Valley, called Sandbox, and tells the story of young aspiring inventors trying to start their own companies. Seo Dal-Mi is one of those aspiring young inventors. She hopes to one day build her own company and become a CEO. After her mother left her father for a richer man, taking her elder sister with her in the process, She was left to stay with her father. Her father soon died from an accident. She was raised by her grandmother and is very ambitious just like her father.

Then we have Han Ji Pyeong who grew up around Seo Dal-Mi without her knowledge. They share an entwined past that she does not know about. However, a sudden meeting seems to be about to pull it all out to the surface. Nam Do-san is the founder of Samsan Tech. He is a tech guru, with great coding and math skills. He and his friends manage to code their way into Sandbox and their journey of letdowns and success began there.

Rather than give you a blown out review of the drama, I will list the reasons I did not like the drama and explain how it ties it all together.

Let’s start with the question, Who is the main male character? – Usually with a lot of dramas, we have a clear-cut main lead (male and female, especially in the romance genre). However, with this drama, it was so confusing because the main male character kept shifting from Han Ji Pyeong to Nam Do-san. This seriously pissed me off. The drama starts with us believing that Han Ji Pyeong was the main character. Especially since we observe his trauma of leaving the orphanage to living with Seo Dal-Mi’s grandmother and then devising a plan to write letters that comfort Dal-Mi using Nam Do-san’s name. A name that they had just picked up from a newspaper. At this point, Han Ji Pyeong was the perfect male lead and this drama would have done fine without the other. Other than the fact that Do-san was brought in because his name was used, he honestly was not needed. Anyway, I digress.

Why does she pick Nam Do-san? – The relationship between Do-san and Dal-Mi was just painful to watch. There really was no chemistry whatsoever, they did not need to date. She had no reason to choose him. I mean seriously. I am not necessarily saying that Ji-Pyeong would have been a better partner, it’s just that Do-san was just not it. He has no special attributes, he is not particularly memorable. Believe me, this is not the fault of Joo-hyuk who plays Do-san. Do-san is just a poorly written character with no flavor and purpose. When he started making decisions that could make or break the company on love, I gave up on him. He was not rational and neither were his friends. The only voice of reason was Han Ji Pyeong. I will say it again, Han Ji-Pyeong carried the whole drama on his back.

Who is the real villain or is there even a villain? – it is okay if there are no villains in a drama. But if there should be one, let them be good, at least make them calculating and manipulative. Make the villains formidable enemies, not ones that crack and give in under slight pressure. An example of a good villain is Jangga Chairman in ITAEWON CLASS  he was really good. The villains in this drama kept changing, first, it was Dal-Mi’s sister, then it was her mother’s new husband, then it was the coding twins, then at one point Ji-Pyeong was made into the villain. The whole thing was just a mess. The villains were so easily defeated that they need a new one every episode. I mean, it is not a serial crime show for fuck sake!

Why make starting a business so easy? – I have a number of friends who have tried to start and business and failed. The few who actually manage to get their ideas running off the ground would never in millions of years make career-breaking decisions on love. This drama was supposed to highlight the hardships that young people in the tech world face when trying to start-up their own company. Do-san was to hot-headed and at the same time not hot-headed enough to know when his misplaced anger was necessary. There were so many opportunities that just landed on their laps that would be so hard to get. I understand that we are to believe that Do-san and his team are coding geniuses but it is easy to see that is the only thing they are genius at.

Why suddenly make everything about romance? – If there is anything that pissed me off most about this drama, was their ability to shift everything into the lap of romance. Fair enough, the first six episodes were kind of okay and I had the ability to expect a lot. BUT once the romance between Do-san and Dal-Mi started everything just went downhill from there. Instead of a drama about start-ups, it became a whiny fest. I will say it again, the only character in this drama with sense is Ji-Pyeong. He was willing to lay the hard facts. He was ready to criticize the team so that they could be better. They made him into the enemy. The whole suicide angle was a bit unnecessary with the blame wrongly placed. Blaming Ji-Pyeong for asking the necessary questions at a tech and business convention is just silly.

One thought on “5 REASONS WHY I HATE KDRAMA START-UP”