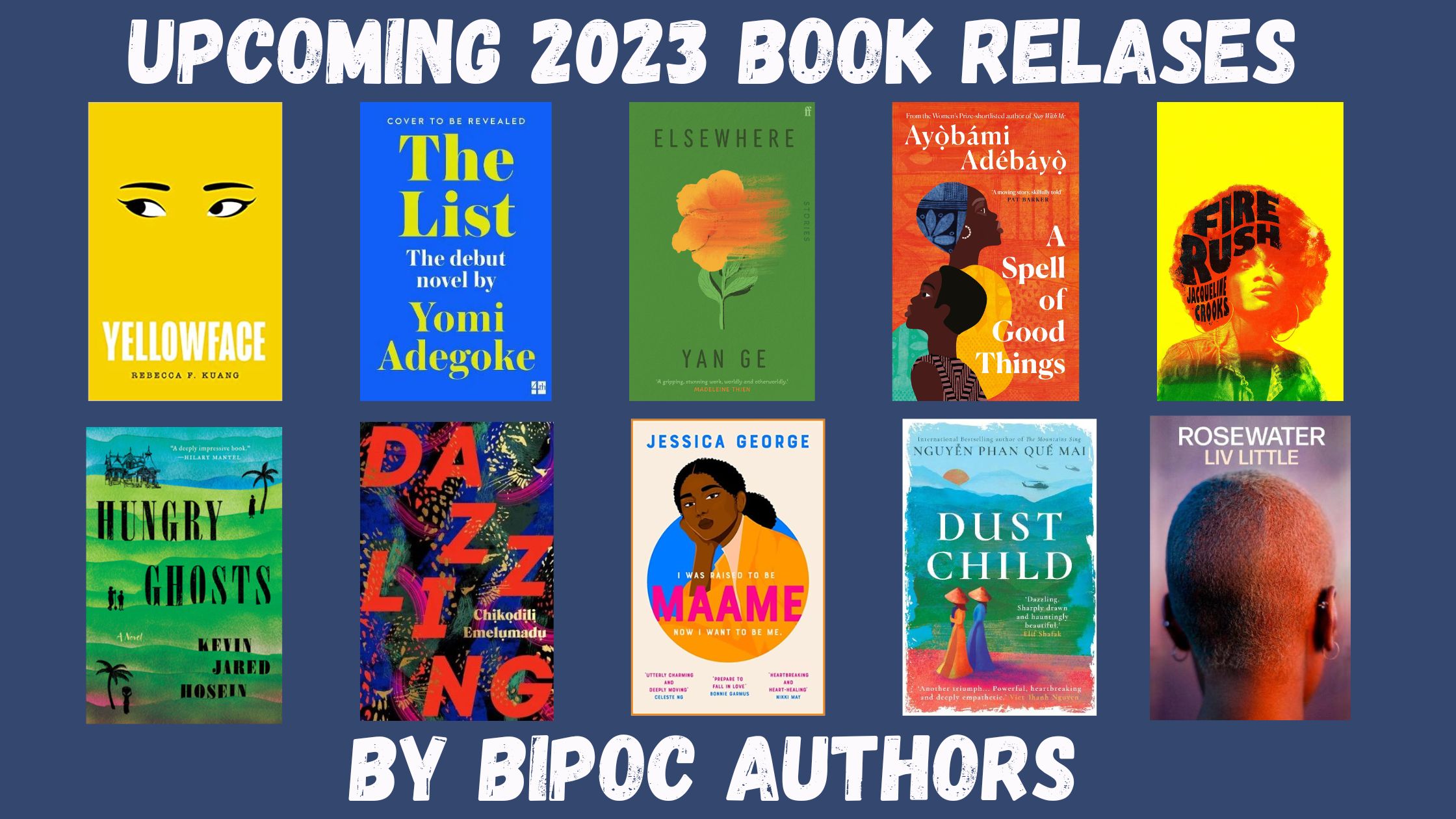 I have been so lucky to be sent a number of upcoming releases by BIPOC authors. Some of which I have started reading, others I cannot wait to read them.

Authors June Hayward and Athena Liu were supposed to be twin rising stars: same year at Yale, same debut year in publishing. But Athena’s a cross-genre literary darling, and June didn’t even get a paperback release. Nobody wants stories about basic white girls, June thinks.

So when June witnesses Athena’s death in a freak accident, she acts on impulse: she steals Athena’s just-finished masterpiece, an experimental novel about the unsung contributions of Chinese laborers to the British and French war efforts during World War I.

So what if June edits Athena’s novel and sends it to her agent as her own work? So what if she lets her new publisher rebrand her as Juniper Song–complete with an ambiguously ethnic author photo? Doesn’t this piece of history deserve to be told, whoever the teller? That’s what June claims, and the New York Times bestseller list seems to agree.

But June can’t get away from Athena’s shadow, and emerging evidence threatens to bring June’s (stolen) success down around her. As June races to protect her secret, she discovers exactly how far she will go to keep what she thinks she deserves.

Ola Olajide, a high-profile journalist at Womxxxn magazine, is marrying the love of her life in one month’s time. Young, beautiful, successful – she and her fiancé Michael are the ‘couple goals’ of their social networks and seem to have it all.

That is, until one morning when they both wake up to the same message:

A young woman bonds with an encampment of poets after a devastating earthquake. Against her better judgment, a college student begins to fall for an acquaintance who might be dead. And a Confucian disciple returns to the Master bearing a jar full of grisly remains. Weaving between reality and dreamy surreality, these nine stories wend toward elsewhere, a comforting, frustrating, just-out-of-reach place familiar to anyone who has ever experienced longing. Through it all Yan Ge’s protagonists peer thoughtfully at their own feelings of displacement—physical or emotional, the result of travel, emigration, or exile. Brilliant and irresistibly readable, Elsewhere explores the utility (or not) of art in the face of lonesomeness, quotidian, and spectacular.

In 1969, sisters Trang and Quỳnh, desperate to help their parents pay off debts, leave their rural village and become “bar girls” in Sài Gòn, drinking, flirting (and more) with American GIs in return for money. As the war moves closer to the city, the once-innocent Trang gets swept up in an irresistible romance with a young and charming American helicopter pilot, Dan. Decades later, Dan returns to Việt Nam with his wife, Linda, hoping to find a way to heal from his PTSD and, unbeknownst to her, reckon with secrets from his past.

At the same time, Phong—the son of a Black American soldier and a Vietnamese woman—embarks on a search to find both his parents and a way out of Việt Nam. Abandoned in front of an orphanage, Phong grew up being called “the dust of life,” “Black American imperialist,” and “child of the enemy,” and he dreams of a better life for himself and his family in the U.S.

Past and present converge as these characters come together to confront decisions made during a time of war—decisions that force them to look deep within and find common ground across race, generation, culture, and language.

Yamaye lives for the weekend, when she can go raving with her friends at The Crypt, an underground club in the industrial town on the outskirts of London where she was born and raised. A young woman unsure of her future, the sound is her guide – a chance to discover who she really is in the rhythms of those smoke-filled nights. In the dance-hall darkness, dub is the music of her soul, her friendships, her ancestry.

But everything changes when she meets Moose, the man she falls deeply in love with, and who offers her the chance of freedom and escape.

When their relationship is brutally cut short, Yamaye goes on a dramatic journey of transformation that takes her first to Bristol – where she is caught up in a criminal gang and the police riots sweeping the country – and then to Jamaica, where past and present collide with explosive consequences.

Eniola is tall for his age, a boy who looks like a man. Because his father has lost his job, Eniola spends his days running errands for the local tailor, collecting newspapers, begging when he must, dreaming of a big future.

Wuraola is a golden girl, the perfect child of a wealthy family. Now an exhausted young doctor in her first year of practice, she is beloved by Kunle, the volatile son of an ascendant politician.

When a local politician takes an interest in Eniola and sudden violence shatters a family party, Wuraola and Eniola’s lives become intertwined. In her breath-taking second novel, Ayobami Adebayo shines her light on Nigeria, on the gaping divide between the haves and the have-nots, and the shared humanity that lives in between

Trinidad in the 1940s, nearing the end of American occupation and British colonialism. On a hill overlooking Bell Village sits the Changoor farm, where Dalton and Marlee Changoor live in luxury unrecognizable to those who reside in the farm’s shadow. Down below is the Barrack, a ramshackle building of wood and tin, divided into rooms occupied by whole families. Among these families are the Saroops–Hans, Shweta, and their son, Krishna, all three born of the barracks. Theirs are hard lives of backbreaking work, grinding poverty, devotion to faith, and a battle against nature and a social structure designed to keep them where they are.

But when Dalton goes missing and Marlee’s safety is compromised, farmhand Hans is lured by the promise of a handsome stipend to move to the farm as a watchman. As the mystery of Dalton’s disappearance unfolds, the lives of the wealthy couple and those who live in the barracks below become insidiously entwined, their community changed forever and in shocking ways.

Elsie is a sexy, funny, and fiercely independent woman in south London. But, at just 28, she is also tired. Though she spends her days writing tender poetry in her journal, her nights are spent working long hours for minimum wage at a neighbourhood dive bar. Not even sleeping with her alluring co-worker, Bea, can quell her existential dread. The difficulty of being estranged from her family, struggle of being continually rejected from jobs, and fear of never making money doing what she loves is too great. But Elsie is determined to keep the faith, for a little longer at least. Things will surely turn around. They have to.

But when Elsie is suddenly evicted from her social housing, her fragile foundations threaten to collapse entirely. With nowhere left to go, Elsie turns to her childhood friend, Juliet, for help.

Among Juliet’s mismatched cushions and shelves lined with trinkets, Elsie is able to breathe for the first time in years. But between their reruns of Drag Race and nights smoking on the balcony, something else soon begins to glimmer in Elsie’s heart . . . Sometimes what you’ve been searching for has been there all along. Can Elsie see it in time?

Soon you will become the thing all other beasts fear.

Treasure and her mother lost everything when Treasure’s daddy died. Haggling for scraps in the market, Treasure meets a spirit who promises to bring her father back – but she has to do something for him first.

Ozoemena has an itch in the middle of her back that can’t be scratched. An itch that speaks to her patrilineal destiny, to defend her people by becoming a leopard. Her father impressed upon her what an honour this was before he vanished, but it’s one she couldn’t want less – she has enough to worry about as she tries to fit in at a new school.

But as the two girls reckon with their burgeoning wildness and the legacy of decisions made by their fathers, Ozoemena’s fellow students start to vanish. Treasure and Ozoemena will face terrible choices as each must ask herself: in a world that always says ‘no’ to women, what must two young girls sacrifice to get what is theirs? It’s fair to say that Maddie’s life in London is far from rewarding. With a mother who spends most of her time in Ghana (yet still somehow manages to be overbearing), Maddie is the primary caretaker for her father, who suffers from advanced stage Parkinson’s. At work, her boss is a nightmare and Maddie is tired of always being the only Black person in every meeting.

When her mum returns from her latest trip to Ghana, Maddie leaps at the chance to get out of the family home and finally start living. A self-acknowledged late bloomer, she’s ready to experience some important “firsts”: She finds a flat share, says yes to after-work drinks, pushes for more recognition in her career, and throws herself into the bewildering world of internet dating. But it’s not long before tragedy strikes, forcing Maddie to face the true nature of her unconventional family, and the perils––and rewards––of putting her heart on the line.

Quick note: I have only stated the UK release dates!