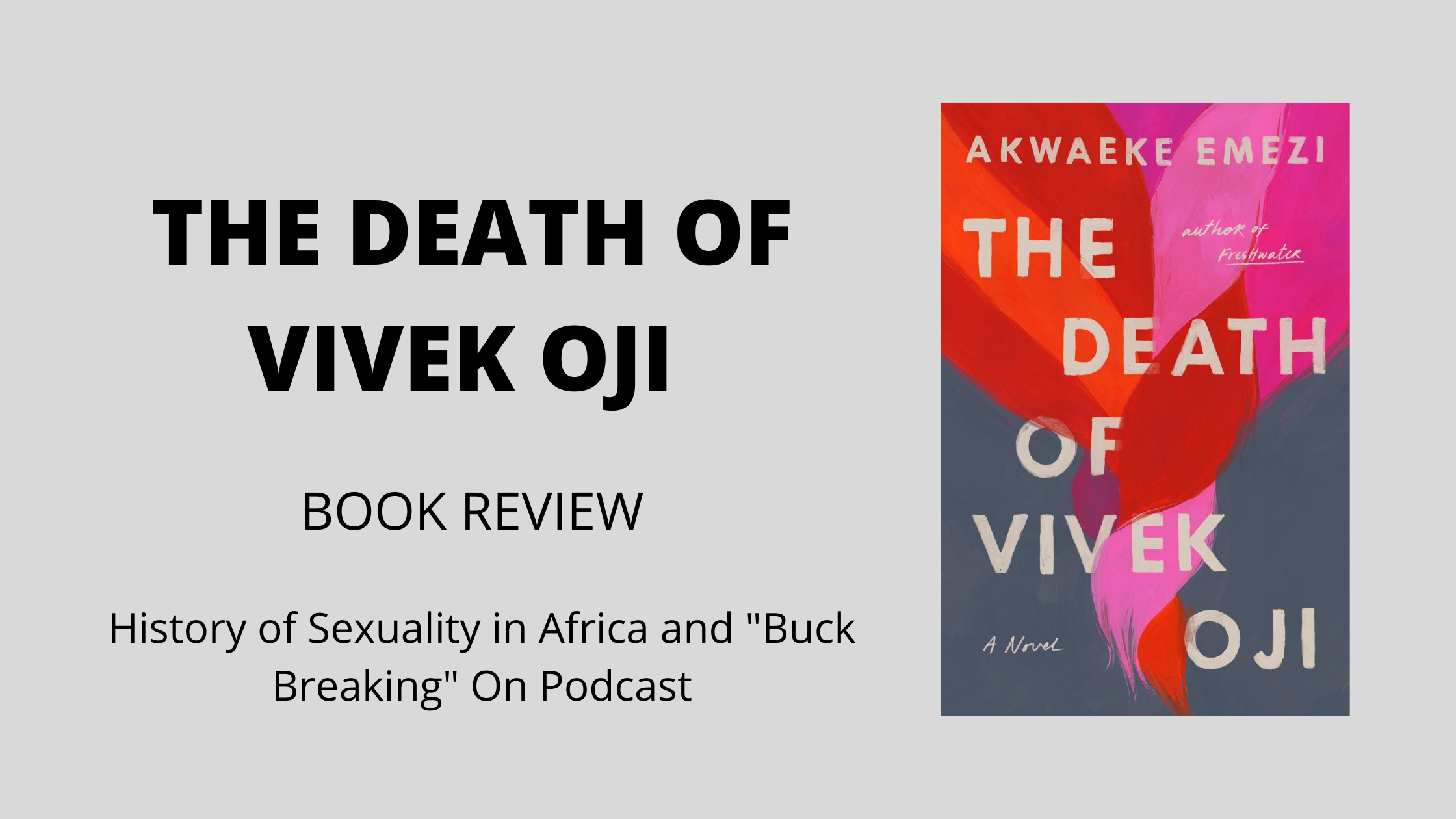 Welcome to the review of The Death of Vivek Oji!

Its been a bit since I wrote a long post, as most of my recent posts have just been backlogs. I read The Death of Vivek Oji by Akwaeke Oji a few weeks ago and it is now one of my favorite books of all time. I will tell you about it in a bit and why I have decided to also include a small but rich part of Africa’s past. Sexuality is never really a topic of discussion in Africa as people seem to think that it is the handwork of the devil and it is the ‘white man’s sin’.

Digging deeper into homosexuality roots in Africa has led me to a wealth of information from caves to carving of gods and the African culture in General. Also, I learned a bit more about how homosexuality was used as a power trip during slavery. But for more on this, I have a podcast on which I have discussed this book more and also spoken vastly on research into sexuality in Africa. One thing I do have to point out is that the ‘white man’s religion’ has a huge part to play in how non-hetero or non-conforming sexuality is viewed in Africa. I hope you check it out.

The Death of Vivek Oji by Akwaeke Emezi Like I said this book is one of my favorite books of the year, it is so different and unexpected.

This book starts with the death of Vivek Oji and his mother finding his body on her doorstep. As expected her life seems to stop at that moment. As any mother who feels that sort of loss would (I mean there is a reason why there is no name for a woman who lost her child). She begins to dig deep, looking for the reason or the cause of her son’s death. Vivek is a biracial boy living in the southwestern part of Nigeria (Owerri) with his mother and father. He has a group of friends that entails his cousins and other familial relationships. This book is told from multiple perspectives, including a third POV. The most important POVs we have are that of Vivek and Osita. Osita is Vivek’s cousin and his first love (Will explain later). We see them as youths as they navigate this country that riled in political mayhem, religious fanaticism, gender division, and more.

The first real experience that they both have was Vivek peeping on Osita and his girlfriend having sex. I mean as much as this is wrong, this happens a lot more than you would imagine. He ends up freezing and glazing over which is some that he has done a lot over the years. This caused a fight between him and Osita and there is a divide between them. Years slowly being to pass and Vivek redraws more into himself, this is when his family (not his mother and father) but members of the Nigerwives thought what was wrong with Vivek was spiritual. They took him for spiritual deliverance, which usually involves the person getting wiped. As expected this causes him to shut down and honestly, I thought at this point he had decided to do what he wanted and what would make him happy. He grew his hair out and soon Osita returns for a visit and they have their first sexual relationship with each other. I mean, god forbid, their families find out, getting wiped would have been the least of their problem. However, the sexual relationship between family members of the same gender happens a lot more than people admit in Nigeria. As sexual diversity really isn’t accepted in Nigeria, the two members of the same family, seem to think that they have equal stakes in the sexual relationship because of the ‘shame’ they both would feel if it got out.

Anyways, their relationship went on for a bit and Osita grew to love Vivek and vice versa, but everything seems to change when the added fear of being caught by their family, well more their parents. As their other siblings and cousins knew or had relationships of their own that they were trying to hide. Vivek took comfort in the daughters and children of the Nigerwives and he began to reveal his true self and that brought him peace and joy in his last days.

This book is less about the death of Vivek and more about the little pieces of social consciousness, mental anguish, familial trauma, and sexual identity. This book is so beautifully crafted and socially conscious especially when it comes to a topic that Nigerian refuse to talk about. I definitely would advise that everyone read this book.

DON’T FORGET TO CHECK MY PODCAST!!

13 thoughts on “THE DEATH OF VIVEK OJI || Sexuality and Africa”