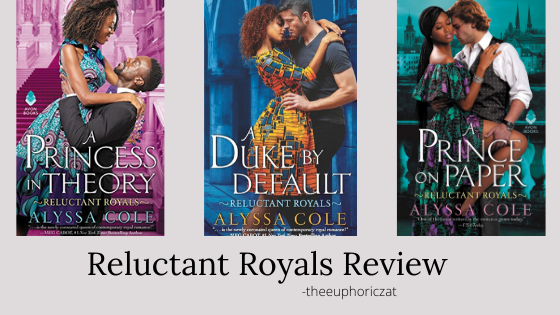 I have been trying to diversify my reading by adding a lot of black authors (I have a lot on my list already but a bit more won’t hurt anyone) and I thought rather than just read books that talk about struggles that black people (As I have read a lot of that in the past) like me face, I decided to delve into the world of romance. I was recommended Alyssa Cole and the Reluctant Royals series.

A Princess in Theory (Reluctant Royals #1)

I can not believe that there has been this gem of an adult romance and I am just getting around to it. I do have to say that this is probably my first time reading adult romance that reminds me of home or one that I want for myself (Who wouldn’t want an African Prince)
Naledi is an epidemiology grad student who is working so much and barely has enough time for herself, however, she cannot escape from the scam that she believes is coming her way. Receiving numerous emails stating that she is the betrothed of a King to be in an African kingdom she seems almost sure to have never heard of. So like any sane person, she sends an email after much frustration tell the sender to “FUCK OFF”
As you know with most adult romance, this seems to be an invitation, like a mating dance pulling Prince Thabiso, the crown prince of Thesolo to her. Of course like the rich hot hunk he is, he decides “I must meet the woman who dares treat me as such, she is not like everyone else” to meet her.
He starts working with her at the diner she works at, pretending to be ‘Jamal’ (at this point in the book, I am like, who wouldn’t want a hot Jamal, but I digress). As you can expect they fall for each other.
Read it…………….

A Duke by Default (Reluctant Royals #2)

I am amazed at how much I enjoy this book. After speeding through the first book, this one comes as no surprise. However, I seemed to enjoy this book more than the first one.
Here we follow Portia who is Naledi’s friend who we met in book one. Portia is a girl who believes that the best way to solve her problems is with a bottle and a new man. But she has decided to change her ways and to focus on herself, she takes up an apprenticeship in Scotland making swords. On getting to Scotland she ends up macing her boss on the first day (and as you can expect her boss is a hot hunky Scottish)
Tavish is a hot hunk of a man (as expected) and he doesn’t need a snotty rich American disturbing his serene life making and teaching children our to use swords. But he is not expecting how his life is about to turn on its head when Portia finds out that he is the former duke’s son and she accidentally sends an email to the ‘crown’ I would suppose, on his status.
Tavish finds out more about his birth, his mother’s relationship with the former duke and how he came to be (we know its the devil’s tango *evil smirk*) Anyways, he becomes this new duke who will revolutionize the monarch and how the immigrants are treated in Scotland (just read the book).
I can’t really give this book 5 stars on the steamy scale but it was just enough, it was just that Tavish and Portia had such great chemistry that each time they were together, I could feel their heat sizzle

A Prince on Paper (Reluctant Royals, #3)

Before I start raving about this book, I do have to say that I didn’t enjoy this book as much as I did the other two books in the series. I am guessing this series is a trilogy.
Here we follow Prince Johan who were briefly introduced to in book one and we got to know better about in book two, and Nya who is the daughter of the traitor who got jailed in book one (best to the read these books in the other of publication)
Nya has been spending some time studying in New York and is on her way back to Thesolo where she hasn’t been since her father was sent to prison. One thing we know about Nya is that she has been shielded and caged by her father under the pretense of love and protection. This overprotective behavior by her father was just an excuse for the psychological manipulation that he imposed on her. Nya now doesn’t trust easily and she is bent on doing everything to break out of her shell.
Of course, Johan is a tabloid king, with his ass plastered all over the news and gossip columns, he is struggling with the loss of his mother who is known as a selfless person and a hero for the whole of the kingdom. But as you would expect Johan is ‘more than he portrays to the world’. He is a kind and sweet person he cares about his brother and his kingdom. He soon begins to care about Nya

I know that there are 2 novellas in the series but I do not think I will be reading them. These books are available on Amazon for less than 2 pounds and I think there is a steal. So check them out and support a black author.