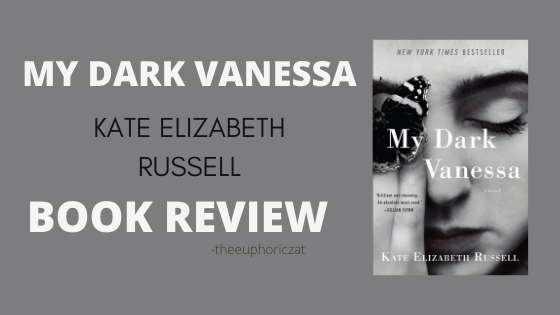 It took me a bit longer to finish this book not because it was a big book or because it was boring but because it was very heavy and the story a little too close to home for me. When I picked this book up, I knew what I was getting myself into and I was ready to go on this journey told in alternating timelines about a woman who was sexually assaulted by her teacher when she was a young girl. Although she had built up this idea that they were in love and that the ‘forbidden’ relationship they had was more because she was mature for her age. I have not done a deep dive into the author, although I felt that there was something more personal about this story. There has been a lot of controversy regarding the content of this book and how it is similar to a Memoir, Excavation that was written by Wendy Cortiz. I have not read that memoir and I can’t say much about that.

You can also listen to me talk about the psychological journey and the evils of child molestation on my podcast.

Without further ado, let’s get into it This book takes place in alternating timelines, between 2000 and 2017. We follow Vanessa as an adult and is forced to face her traumatic past (which is now in her present) following the revelation or the exposure of her former teacher and lover as a child molester and a manipulative bastard basically who rapes children.

When Vanessa was 15 years old, she enrolled in a boarding school where she met Mr. Strane a 42-year-old teacher who was seemingly overly interested in her writing and essays and gave her great feedback and books to read that would help her with her writing. He would call her to sit with him, or stay back after class and he slowly started to manipulated and groom her. He said touching her and as a young girl with really now experience and close relationships except that of her parents who are now far away. She welcomed this attention and to her, she felt special that someone who was older than her and had supposed life experience wanted her. (The issue with child molesters, especially those in the position of power over the child especially teachers or counselors, is that they groom these children and mold their minds into thinking that the child wanted it or they were in some sort of love relationship, which is bullshit). Their relationship went on for as long as it could until she left the school after lying to protect him which she believed she was doing to protect the love they had for each other.

Now, in 2017, with the spread of the #MeToo movement, her friend from school wrote a Facebook post calling Mr. Strane out as a pedophile and writing to Vanessa to come out and tell her story to help police investigations and to make sure that this does not happen again to other children. (I have to say at this point that, I do not believe that a victim should be force or coerced into talking about the trauma that they experience and they should only do so when they are ready and emotionally stable to talk about it. Because once they talk about it their lives would be changed forever). At this point in her life, she still believes that what they had was love and you can see that her current state of mind regarding Mr. Strane was a product of emotional manipulation, grooming, and abuse of power.

She felt that since she was a willing participant (although all the scenes in which she had sex with Mr. Strane was so cringeworthy and annoying, you could see that he was taking advantage of her, especially brief after she left the boarding school, she was drunk and you could tell that he check to see if she was unconscious before he had sex with her, sonofabitch, Just read the book) and that claiming that he raped her would not suffice. There was also the fact that Mr. Strane who at this point was about 60 years old in 2017 was still contacting her, she felt that what she had with him was real.

I know that this might just be me but I felt that her mother didn’t help matters when she found out or even when she had an inkling of what happened, she didn’t do anything. I will get personal for a bit, I don’t think any mother should think twice about reporting this to the cops of even in the minimum taking her child to therapy. Because if Vanessa had been able to see a therapist or even someone who let her know that what happened was sexual assault. then she probably would not have grown up thinking that what she had was a relationship. (Just my opinion)

I know I have said a lot but I have barely scratched the surface with this. This book delves deep into emotional abuse, pedophilia, rape, manipulation, grooming, and abuse of power. As a reader you can tell that Vanessa is trying not to believe all that has happened because that would change the way she sees herself, it would make all her emotions invalid, ruin her self-image and esteem and that seems to be the issue that arises a lot with victims of sexual assault.

Then there are these male warriors who think that Strane was “a victim of the tyranny of feminism” which is just ridiculous. I am not insensitive to suicide but I am not going to shed a tear because a sexual predator commits suicide.
My Dark Vanessa is a dark book not because of death and for but because of the psychological disturbance and rollercoaster of emotions that this book takes the reader through. I had to take a break while reading this book because it brought to mind a lot of things. There are triggers for Suicide, rape, emotional manipulation, grooming, and abuse of power.