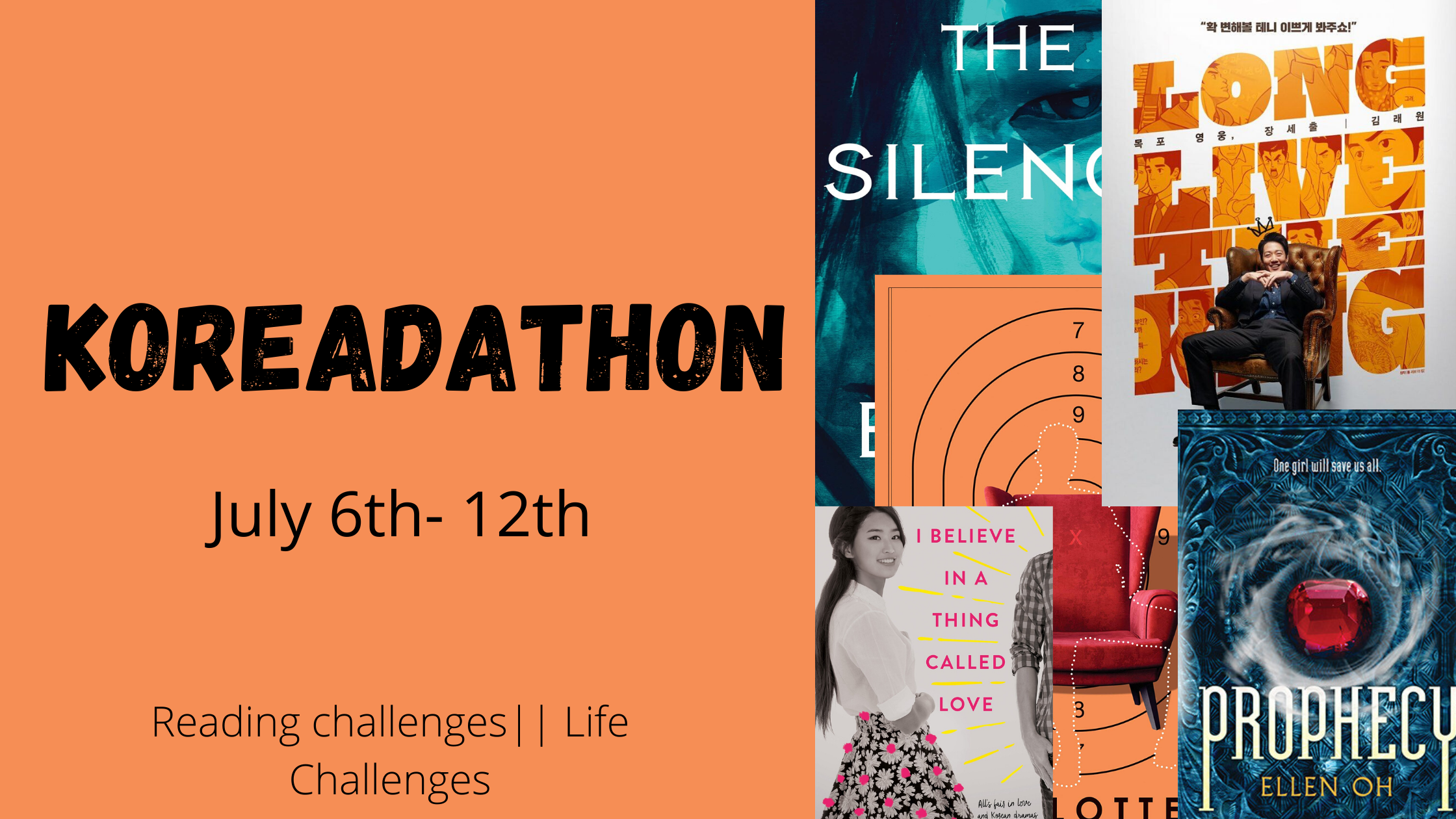 I am a bit late with uploading my wrapup for this amazing readathon. I was able to immerse myself in a culture that I have loved for such a long time. This readathon made me realize that I don’t read a lot of books by Korean authors and I need to step up my game and it also brought a lot of books to the spotlight. Books that might just have gone under the radar.

Anyways I was unable to finish all the books I planned to read and the last one which is The Plotters by Un Su Kim, I have started and I enjoy what I have read so far. It is very different from what I have read so far, I am not really into mystery books and the likes. I plan to continue reading it when I feel I am ready. I was also unable to make Japchae like I wanted to because I couldn’t find glass noodles where I live. I supplemented that with Kimchijeon because I had kimchi and flour, however, I eat it all before I could take a picture. I forgot.

The Silence of Bones by June Hur

I read this book as part of the Koreadathon and I believe it is a solid 4 stars in my opinion. I could have rated it higher, only that the ending was not as climatic as I wanted it to be.
Let me start with the only background of the book.
Set in Joseon in the 1800s, the royal family is getting rid of anyone with western ideologies including those who believe in Christ or this case Catholicism. A lot of people lost their lives and others were named traitors. The queen’s family was doing all these to get rid of people who were trying to over through them from power. Having watched a lot of Korean historical dramas, I know that Korea as a country is one that strives of hierarchy and everyone knowing the place but when Slaves to learn to read and write, when the Yangban (the males in high social classes) was the only one who could, you could see how a problem would arise.
However when a series of death occur and they all seem to be connected to the catholic priest and people who have accepted this western ideology. Everyone in Hanyang is filled with dread. Then we have Seol who is a slave in the police bureau (She is a Damo, a female who assists the police or inspector when they are investigating the death of a woman, so she examines the body and the main purpose is to keep the pride of the dead woman) and she is tasked with assisting a young inspector who is investigating the death of a noblewoman. The fact that her nose was cut off brought attention to her death and at this point, everyone is a suspect including the police inspector Seol is working with.
Delving into the secrets that the dead noblewoman had lead to a lot more questions and it seems to all be linked to Seol who cannot stop eavesdropping on official matters. Seol doesn’t seem to know her place as a slave and that just makes this book different from a lot of others. Seol as a character was intriguing to follow and seeing the story from her eyes was fascinating.
Apart from Seol being an important character, she has her only secrets and pain, she is in Hanyang looking for her brother who she believes is still alive even though she has not heard from him in years, however, she believes that her brother is close and he might have a hand in the multiple deaths across Joseon. She can either keep her mouth shut and protect her supposed brother or she can speak and doom them both to death.

I loved this book, however, the ending did not just do anything for me. It was too bland and I just felt like justice wasn’t served well.
The Killer was allowed to protect his honor and he committed suicide. I don’t know why they believe that allow someone to take their own life was a way to keep their honor. This is some mentality that a few Koreans still have and it is a very devastating mindset that has to lead to the death of millions of people (My opinion)

Boy did I enjoy this book, I felt like I was watching a Korean Traditional drama (Sageuk). It was so good! BUT and this is a big BUT, there was too much talking in this book, I mean if this was a drama, it would just be the actors saying what they will do but not doing it. Imagine a battle scene where rather than fighting, they just stand and say what they want to do but not fight.

The story itself, the plot, the folklore and historical references wrapped in this beautiful book was just amazing. We stay this book following Kira who is the only female in the king’s army and she is also a demon slayer, she is chasing done a demon who can possess people. From the very start, we can see how people in Hansong view her. She is the weird girl with colored eyes, they believe she is a gumiho (a nine-tailed fox, who eats the liver of men), so she is avoided and hated by many until when she saves a group of people from a demon who has possessed a popular rich man in Hansong. As they say, seeing is believing, they suddenly start to praise her.

Anyways she goes back to the palace (as she is also the prince’s bodyguard) and she gets the message that the Queen requests her presence and a little spice to the story, she is about to get saddled in an arranged marriage to Shin Bo Hyun who teased her as a child but he has grown up to be a ruggedly handsome ass (So I was expecting some banter between then, some of which I got but it was not enough). She doesn’t want to marry him but he is bent on marrying her because he believes that their marriage would not be boring and she would keep him on his toes.

With all that happening, evil forces are rising and plotting against the throne, and soon the life of the prince is threatened which means Kira’s also threatened and it is her job to protect the king. It is also revealed that the dragon Musado is royally linked and people think it is the prince but until the end of the book, we don’t get to know who is the Musado. (By the way, I knew, just saying)

I enjoyed the story but the execution was the problem, the characters I liked weren’t present often, the main character Kira was just too bland (I mean for a badass demon-slayer, she is just too tame in my opinion) I was more interested in the guy she was supposed to marry than her.

But I plan on reading the second book because of that ending… I mean the freaking ending, I just want to know what happens

I Believe in a Thing called Love by Maurene Goo

This is a solid 3 star read in my opinion, I enjoyed it but not revolutionary happened and honestly I think that is the point of the story. It has a lot of elements of Korean dramas that I love. There were several Korean dramas mentioned in this book and it was no surprise that I had watched everything
Desi is very awkward when she has to make a conversation with someone that she likes. Being one of the most popular girls in school (I am glad that we did not have to deal with the cliche popular girl tropes that we are forced to endure in YA literature) because is present in a lot of activities and she is at the topic of her class. Desi lives with her widowed father who is obsessed with Korean dramas. Desi has never been interested in dramas until she meets Luca (the hot new artist in school) then she is willing to watch as many Korean dramas as she can so that she can make a list that would allow her to achieve the type of love that is present in Drama.
So makes an ultimate list, that plans out the way they would fall in love and she included the little fights they would have (just ridiculously funny, If only this sort of thing happens in real life).
They start dating and she gets to know more about him and she was willing to do anything to follow her plan including missing her Stanford interview.

There was this particular scene that reminds me of ‘boys over flower’ when Jandi fell into the pool hoping that Jun Pyo would remember her and jump in to save her. Desi tried to do this too, only that she didn’t know that Luca could not swim and he almost died. At least the night ended on a good note and they ended up talking about their feelings.

I talked about this book on my podcast too. I honestly don’t know how to describe this movie. It’s about this mob boss who fell in love with a female protester. I am quite disappointed with this drama because all the Korean movies that I have watched, I have liked. I will try to watch it again later.

If you took part in this readathon, drop your link, I want to see what books you also read.

One thought on “KOREADATHON WRAPUP”