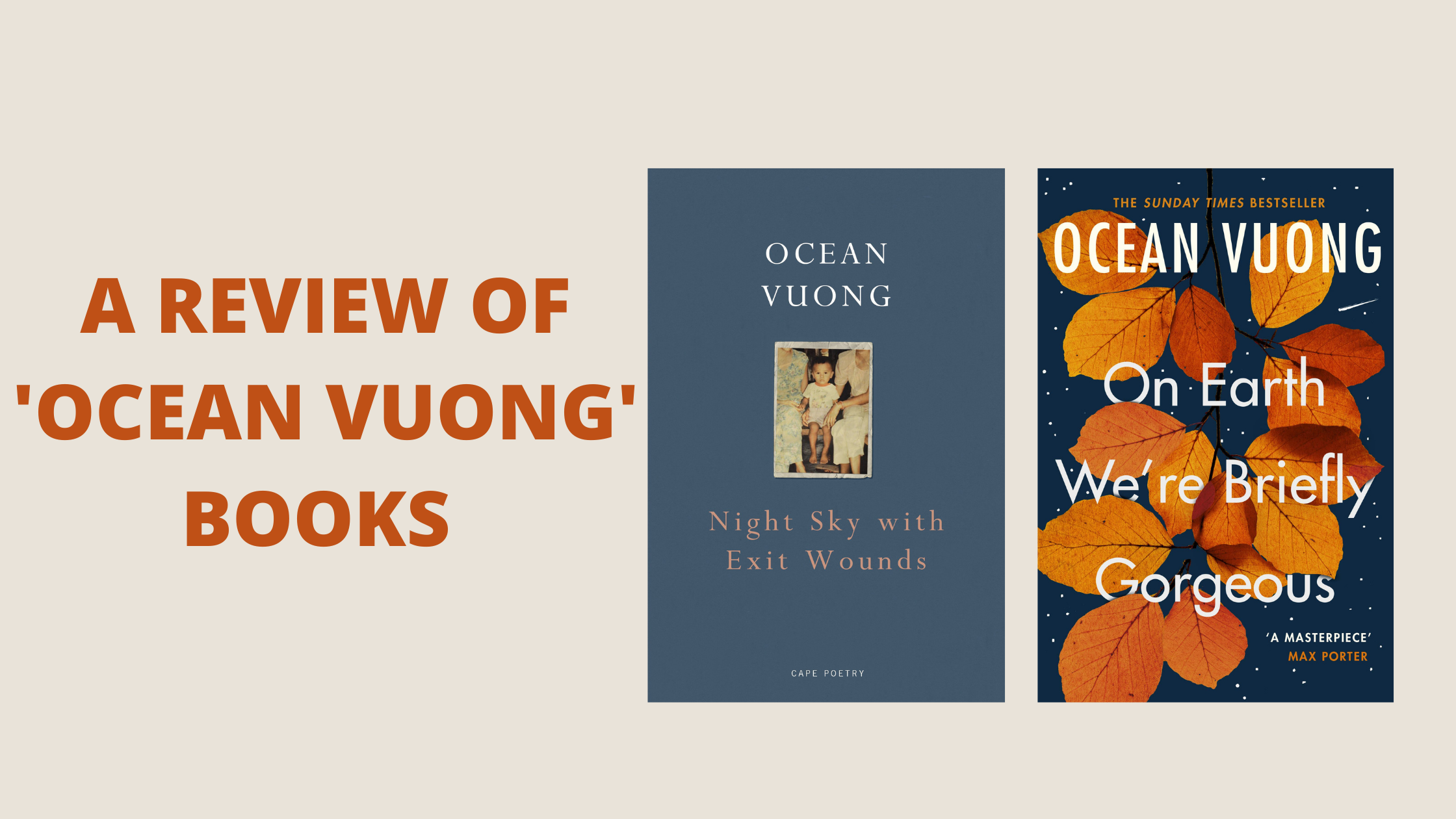 If you follow me on social media or even regularly read this blog you might have figured that Ocean Vuong is one of my favourite new authors: FAV

I will definitely be reading more of his work in the future. There is something so raw and almost magical about his writing which in some way reflects the way Ocean views the world.

Let’s get into the review!

Ocean’s command of language and his ability to move fluidly from topic to topic is just amazing. This poetry collection especially tells a story that sounds almost narrative. It follows the way Ocean sees the world as a young Vietnamese boy who heard and saw the war and then was raised by women who had been traumatized and but not beaten down by the war. He expresses his love of the seasons and poets long since passed. He talks about his invisibility, sexuality, lack of a father, and the conflicts he has as a result of the war. The way he describes war, the smell, the scene and even the taste whilst heartbreaking, is very beautiful.

“When we left it, the city was still smoldering. Otherwise, it was a perfect spring morning. White hyacinths gasped in the embassy lawn. The sky was September-blue and the pigeons went on pecking at bits of bread scattered from the bombed bakery. Broken baguettes. Crushed croissant. Gutted cars. A carousel spinning its blackened horses. He said the shadow of missiles growing larger on the sidewalk looked like god playing an air piano above us. He said; There is so much I need to tell you” from the poem Immigrant Haibun

There are several poems that I really loved that I want to outline. Poems on motherhood and the bond between mother and child in the poem Headfirst where he says But only a mother can walk with the weight of a second beating heart

I think one of the most powerful lines in this book is from the poem title Thanksgiving 2006 which goes My mother said I could be anything I wanted- but I chose to live
This just highlights the fear his mother had as an immigrant in America and Ocean’s hope not only to be a son of the war but a son that stays alive in a new country that highlights his difference has a strike against him.

I cannot begin to tell you how much I loved this collection. I highly recommend it.

There is something about a poet writing a book that almost ensures you that their lyricism would make a beautiful transition into a novel. Ocean writing has a tasteful rhythm that reading this book seemed like poetry.

On Earth We’re Briefly Gorgeous is actually the title of one of his poems in his poetry collection and it encapsulates his feelings about his father, mother, first love and even strangers he meet when he moved to America. This book continues on that tangent and it explores more his relationship to the world. He writes this almost semi-autobiography as a letter to his mother who he knows would almost never read the book because she cannot read English. This means that with the knowledge that she would not read it Little Dog the main protagonist was able to write about the abuse he suffered at the hand of his mother and at the hands of the world.

We follow Little Dog, a young Vietnamese boy who has always been told by his mother to stay invisible because that is a way to keep him safe in a new world where your difference can get you killed. It was so much like the war that they had escaped. He expresses feelings that lots of immigrant children feeling, going to Goodwill for clothes, he described it beautifully as feeling rich with our bounty of discarded treasure. The little things we take for granted are the things that bring immense joy to others.

Little Dog talks about his mother living with schizophrenia and how that shaped his experience living in Hartford. He talks about his grandmother and how she and a lot of girls her age at to go into prostitution during the war because they were what could feed them and their families. It was also what led her to her American soldier who later because her husband and the father of her daughter. The story of their relationship was just so heartbreaking (Read it)

You could almost feel Little Dog’s thirst for acceptance and reliability when he described Tiger Woods origin. I mean he had to go that far to find someone who could be almost a pillar of hope and worldly acceptance so that in his invisibility he can be seen and heard by the world. It was quite fascinating to me.

We follow Little Dog into young adulthood and his first love, Trevor ( I felt I should highlight something really briefly here, the lack of education around gay sex and the consumptions of said thirst for education from porn (a market that is centred, like I always call it, on the climax) does not show the realities that proper education and sensitization that this boy needs. It creates a false narrative that might turn a lot of people from sex – which is why I think it was amazing that Ocean added this into his love story. Also, he addressed how toxic masculinity led his lover to drugs which he had felt was more masculine than having gay sex. The desensitized logic), his mother’s job at the nail salon (in a salon where most of the workers don’t speak English, Sorry becomes the only word of the conversation. Ocean best describes it In the nail salon, sorry is a tool one uses to pander until the word itself becomes currency. It no longer merely apologises, but insist, reminds; I’m here, right here, beneath you. It is the lowering of oneself so that the client feels right, superior, and charitable. In the nail salon, one’s definition of sorry is deranged into a new world entirely, one that’s charged and reused as both power and defacement at once. Being sorry pays, being sorry even, or especially, when one has no fault, is worth every self-deprecating syllable the mouth allows. Because the mouth must eat), Self-acknowledgement (Staring into the mirror, I replicate myself into a future where I might not exist).

Little Dog talks about the death of young boys and girls to drugs and the pain that a lot of families feel in the wake of it. He addresses the death of his grandmother and how that shook his mother and her sister.

This book did not end in a ribbon but almost as a dare to the world to try to take his piece of happiness away. I really enjoyed reading this book and I hope you check it out!