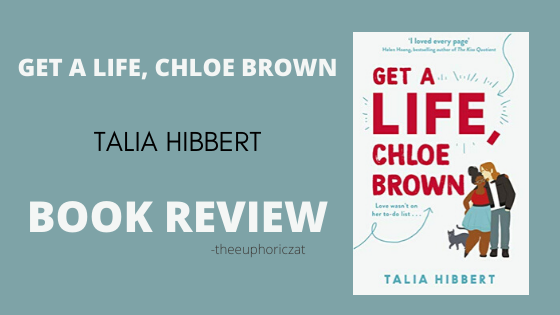 I know that I rarely review books individually except they are part of a book tour but I can’t help but review this new adult romance book by Talia Hibbert. I love this book, I flew through this book so fast and I have read it again before reviewing it. The characters are just so loveable that they are easy to relate to despite their difference in social class and race. The little misunderstandings they have are all that I enjoy right now and they both of them trying so hard to hide the fact they both have feelings for each other even when she has it on her list.

Get A Life, Chloe Brown by Talia Hibbert

I enjoyed this book.
Chloe Brown is a computer geek who has fibromyalgia and since she found out about her diagnosis she has redrawn from society and she is living her life based on a shit ton of scheduled plans and lists. Her withdrawal from society stems from her sense of abandonment and her shitty fiance who left because he couldn’t cope with her health issues (I don’t think I need to say this but he is an asshole). But one day after she was almost killed by a drunken driver while standing in front of a coffee shop she decides to take life by the horns and fight with all she’s got while enjoying the time she has (as she believes she is going to die if she overdoes stuff). She makes a list of things that she wants to do now that she has decided to give life a go (Honestly I find it funny that she would make a list to live life no by a list). One of the first things she does was to move out of her parent’s mansion and into a flat. This is how we are introduced to Red.

Redford Morgan is the epitome of a hot sexy painter who is good with his hands and can work on pipes, hearts, and other organs (if you get me). Anyways, hot Red is the superintendent of the building which is owned by his friend, where Chloe now lives. Red is taking a break from the capitalist society after he broke up with his rich and snotty girlfriend who left his self-esteem, his appreciation, and confidence in his art in shambles. He thinks Chloe is ‘Cute as a button, but her tone cuts like a knife’ but as you can expect she cannot stop thinking about her once he gets to know her more. He also does not know that she also cannot stop thinking about him, as she is using him to tick off something on her list. So when she goes to him to help her with her list, it comes as no surprise and soon sparks her flying off the pages.
I liked that Talia Hibbert included briefly situations that evidenced their racial differences and how they both felt about it, I felt that especially with all that is going on right now, understanding a partner of color and the struggles they face is a basis for a multicultural relationship.

Also, I loved the way Chloe was a plus-size but was not the focal point of the book. it was irrelevant in the context of the story and I loved that, I am so used to reading books with plus-size characters that seem to always have issues with being plus size and they are either depressed about that or they feel unwanted or when their advances are denied they think it because of their weight (honestly, the guy might just not be into you, move the fuck on).

And of course, an unexpected part of this book was the sexy scenes, gosh these were as steamy as they can get. I love reading adult literature and believe me when I tell you that I have seen writers use so many different words to say ‘Vagina’ and ‘Penis’ take for example ‘heat’, ‘wetness’, ‘womanhood’, ‘core’ and I just want them to say ‘pussy’. I mean how hard is it to call a pussy a pussy, I just don’t get the hesitation especially when it is adult literature (they need to get a grip). The fact that pussy was called just that makes me happy.

8 thoughts on “GET A LIFE, CHLOE BROWN|| BOOK REVIEW”