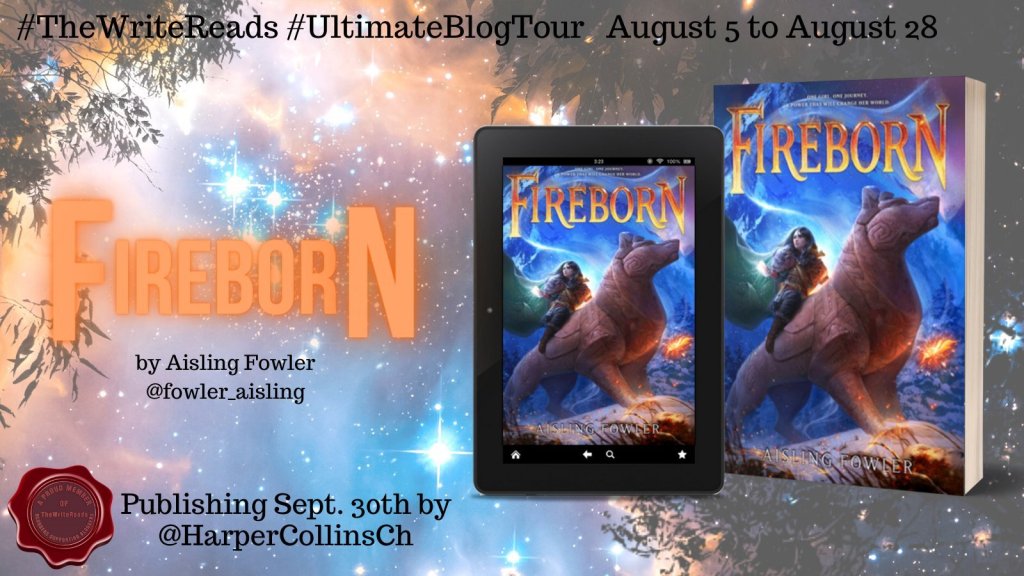 Welcome to my stop on the ‘Fireborn’ book tour hosted by #thewritereads. Thanks to HarperCollins for making this book available to me. I have read a lot of books since I starting partaking in tours hosted by #thewritereads, lots of great ones and this one is just a different level for a middle grade. It is inclusive and representative! Check out review below. Lyra. Lucy. Percy. Once in a generation, a hero emerges whose story enthrals readers worldwide.

Fireborn is an epic quest, perfect for fans of the His Dark Materials and The School for Good and Evil series, that will spin readers into a magical world like no other–and introduce them to an unforgettable new heroine named Twelve.

Ember is full of monsters.

Twelve gave up her name and identity to train in the art of hunting them–so she says. The truth is much more deadly: she trains to take revenge on those who took her family from her.

But when Twelve’s new home is attacked, she’ll find herself on an unexpected journey, where her hidden past is inescapably intertwined with her destiny–and the very fate of her world.

Before I gush about how much I loved this book let me give you a little teaser. Children from different clans decide to join the Hunter’s lodge for different reasons. Some because they are not wanted by their families or their clans or they are seeking the power that the Lodge offers, but every child in the Lodge is there for a reason. In this book, we follow four of those children. Children who have given up their names, and clan identities to serve as a single body at the Lodge. Now named, Five, Six, Seven and Twelve. After a fight in the yard, Five and Twelve are sent to the dungeons as punishment but they got more than a sleepless night.

The Hunter’s Lodge train fighter and people who honour their sacred pledge to serving all seven clans equally, to protect the people of said clans from the darkness and tyranny of the wild (mostly magical creatures that are rising again after the dark war – as always humans are the most terrifying of the creatures). The clans are known to fight each other but the hunters ensure that everyone remains at peace.

So at night when the enemy breaks through the impenetrable walls of the Lodge and kidnaps a student (Seven), everyone is at their wits end. Twelve who seems to have finally found a ‘friend’ in Seven decides to go after the Goblins and get her friend back. This takes her on an adventure of friendship, family, self-realization, danger and most importantly self-love! Twelve learns that no man is an island and she cannot do everything by herself.

I mean I could go on and on but I think the most important part of this book is both self-forgiveness and friendship. Twelve has always in some way hated herself for the death of her sister and her whole village. The poor girl had to dig holes to bury the bodies, you can understand that she is broken and that it would shape itself into anger and vengeance. But when she finds out that the clan she has hated for so long as produced people she now calls her friends, she is immediately disgusted and angry. I am happy that she realized that it was not their fault.

Five was such a fascinating character. I wished he was explored a bit more. One thing we do know is that he is queer, he likes Six and he is a very witty person. The Oakhammer really did them dirty with letting him spill his feelings for Six. I thought it was sad but it was cute to see how they related to each other later. I was happy that Six did not have any internalized homophobia or anything like that. I just wished they had a conversation about it. Hopefully in the next book.

I will stop spoiling this book now. You need to read it. My favourite line in this book comes when Twelve remembered something her mother said to her

‘Forgiveness is not the same as indifference, in some ways, it’s the opposite’

Hating someone is very easy, you don’t have to put any effort into that. But to forgive, to let go, that is the hardest thing that a person can ever do. To see Twelve grow has a person through the course of this book was just amazing.

Now that the walls are down and Twelve’s fire has burnt it down, I cannot wait to see what happens to the new Hunters! Aisling was born in 1985 and wishes that she had grown up in a magical, mountainous kingdom, but was actually raised in Surrey on a diet of books and Buffy the Vampire Slayer. Her early ‘adventure’ stories involved surprisingly little action and her first novel (3 pages long) was politely declined by publishers at age 11. After earning a BSc in Biology and working as a support worker and then a nurse, the idea for her debut novel, Fireborn, came to her as she moved back and forth between London and the US. Now based in Hackney, when she is not reading or writing, Aisling loves cooking and plotting adventures (for herself as well as her fictional characters). Fireborn will be published by HarperCollins in 2021.

Thanks for reading. I hope you check it out!