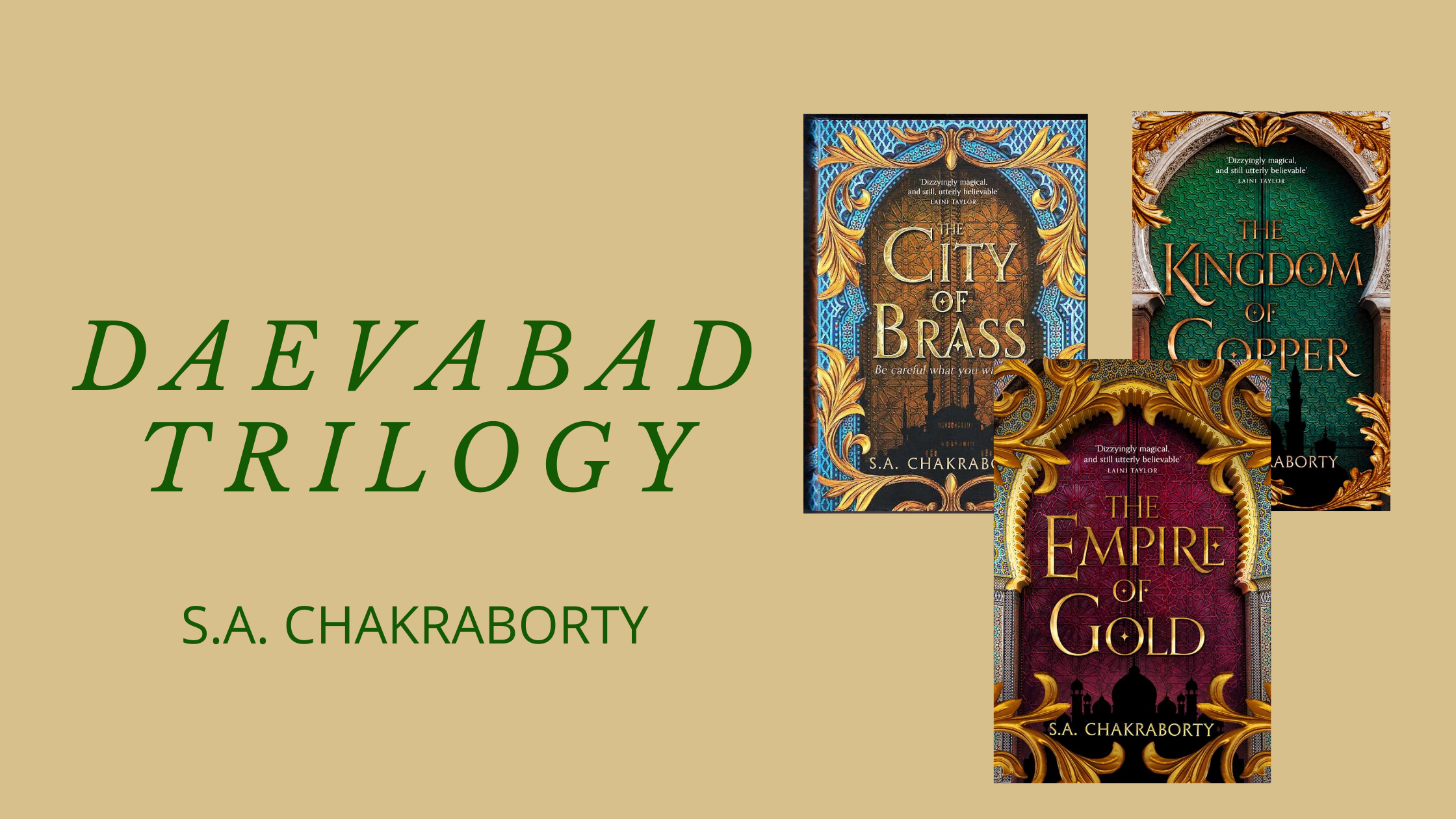 Welcome to Daevabad, a city where morals are questioned, faith is unshakable, magic is unpredictable, heads roll but love is found.

I read the first book as part of the Immortal Bibliophile Book Club Book of the Month of July which is hosted by Noura and I fell in love with the writing, the world, the magic, and most importantly the characters (and there are a ton of them). I could not stop thinking about An Ember in the Ashes series by Sabaa Tahir and how much I loved that book and how similar ad yet very different they are.

There are three books in the series and I was able to read all 3 books in about 2 weeks because I was so intrigued, I wanted to know more as soon as possible. The writing is just spectacular. The descriptions are so vivid that it transports you into the body of the character whose perspective we are reading from. The way the details of the world are described, it felt like I could feel the sand pour through my fingers. Its been a bit since I found such amazing writing.

We begin in Cairo, the capital of Egypt (a place that I want to go to but can’t afford to YET) in the 18th century and we explore the city from the eyes of a con woman whose knowledge of the city is vast and wondrous (I enjoyed Nahri as a guide through this city) then suddenly almost without notice we are swept into this world where everything is magical and all that we assume was a myth is true. Then it is flying carpets, fire-worshippers, and a city of brass.

The City of Brass This book is told in alternating POV, Nahri, and Ali.
We follow Nahri who is a con artist who without belief has powers that allow her to heal faster than any human, and also heal others, and have other talents that allow her to con lots of nobles in Cairo. But one day, one of her cons leads to her singing a song in a language that she feels in her bones but have never learned or heard of before, and summons a dark (supposedly handsome) djinn warrior and she is exposed to a world that she could have never imagined. He tells Nahri about where all her power comes from and he was planning to take her to the legendary city of brass, Daevabad. The journey across vast landscapes until they reach the city and the stories that the djinn, Dara, as told her about and she was surprised and skeptical by the welcome she gets in Daevabad by the current leader of the city. Getting to the city she meets Alizayd al Qahtani, Ali, who is the second son of the King, but he is also a Half-tribe which is an eye-brow-raising thing. Ali is faced with what he knows is right and what he has to do to please his father and his brother. Nahri and Ali form a bond after Ali was sent by his father to ease Nahri into society and also link her and his elder brother together in hope that they can get married and unite the divided djinn in Daevabad. However, he ends up catching the feels, and honestly, we don’t know how much he feels for her but there is something there.
Nahri and Dara have a thing but I am not a supporter of their relationship.

At this point, especially if you have not read the first book, I have kept it as spoiler-free as possible but know that there is the possibility of being SPOILT.

The Kingdom of Copper This book picks up 5 years after the events of book one. Nahri is still sad and angry about the death of Dara but she is now married to Emir Muntadhir al Qahtani after being manipulated and strong-armed by Ghassan. Dara killed Ali which lead to Ali falling into the sea that holds power. At the depths of the sea, Ali told his name to the Marid who took over his body and came back to kill Dara. Nahri witnessing the death of her beloved Dara made her hate or not hate Ali (Basically she doesn’t know how she feels)

Not to say too much. Ghassan sees the power that Ali now has, he sends him away to Am Gezira which is a place that is lacking water. Ghassan sends him there in hopes that Ali would be killed off and he would not be attested. However, Ali ends up being the savior as his abilities allow him to creates different oases for the people there. Ali hears of a threat that is to happen during the celebrations welcoming in the new century, he travels back to Daevabad in hopes to protect his family and people but things seem to be more than he can handle, especially with his Marid powers growing.

As expected with this series, dead people refuse to stay dead, Darayavahoush e-Afshin is alive and he is a badder bitch than before. Just know that some of the threat brewing as to do with him. Back in Daevabad, Nahri is doing everything to unite the rivaling tribes in the city, so she decides to rebuild her ancestor’s hospital which she was able to do with the help of Ali, after a much-needed conversation between the two of them. Oh, and by the way, no one told me that Muntadhir and Jamshid had something steamy going on. I am quite happy that Nahri knows about it because it gives me the much-needed break from their ruse of a marriage.

Well, the three siblings decide to get Suleiman’s ring from their father hoping to overthrow him, but little did they know the price they had to pay for the ring. At least they didn’t have to kill him themselves. Dara, Nahri’s supposedly dead mother and their gang of ifrits storm the city leading to the death of lots of people including the king, Ghassan. Copper bullets make it hard for Nahri to heal people (just throwing that out there) Nahri and Ali escape the burning city with the help of Muntadhir who sacrifices himself to hold Dara back, by the time Nahri and Ali escape Daevabad with Solomon’s ring on Ali’s finger, Daevabad is almost in ruins

They wake up in Cairo.

The Empire of Gold Daevabad has fallen into the hand of Manizheh and Dara (who by the way appears to be hotter than before both in physique and fire techniques). With Daevabad’s already fragile society and loyal division, it wasn’t hard for the city to fall after the death of Ghassan and the imprisonment of Muntadhir the Emir.
Nahri and Ali were able to escape from Daevabad with the ring on Ali’s finger and by the time they arrived at Cairo, Ali was already feeling the effects of the ring that was making it way into his heart. With the ring gone and the magic that holds together Daevabad and fire magic unbalanced, everyone in Daevabad is stripped of their magic except Dara who was relieved of Suleiman’s curse.

In Cairo Nahri and Ali make their way to the apothecary that Nahri used to work and they were able to take solace there. Soon, with Nahri unable to use magic and Ali experiencing immerse pain anytime he uses the Marid magic, he is forced to make a difficult decision. He can either stay in Cairo with Nahri and live out a somewhat peaceful life together (since we all know he is in love with her) or he can go back to Daevabad to save his sister and the scores of people he has left behind including his “dead” brother.

Still battling to maintain the balance within himself, they decide to go to Ali’s motherland in Ta Natry where he knows he would be safe and also be able to regroup and reconquered. They met some pirates who help them across the sea and when they get there the story finally picks up. We see Jamshid (who happens to be Nahri “brother”) is still alive and in Ta Ntry. While all these are happening in Ta Ntry, Daevabad is going to ruins with Zaynab having developed her group of people fighting against the tyrannical rule that Manizheh has brought into Daevabad.
I would have given this book a 5 out of 5 stars, I just didn’t get enough of Nahri and Ali’s relationship. I appreciated the fact that he was holding himself back from violating his brother’s wife but….. I mean his brother his in love with Nahri’s brother anyways… my gosh it is just a twisted rhombus because we cannot forget Dara too.

As someone who really loves reading as diversely as possible, I rarely read books set in the middle east or books that have Islamic representation. But when I do find one and read it, it is always spectacular. I think for me, this book was just the amalgamation of all the things I like, religion, magic, politics, sibling rivalry, royalty, diverse characters, and location. A set that takes place in a fictional world or rather a world beyond mortal eyes where people live for hundreds of years, that is ruled by an almost out of his mind king, is all I want. Take for example Ali who is a very religious and devoted worshipper who always felt down and downcast when he had to choose between putting the lives of thousands at risk or just take the life of one man. I think his sadness stemmed from the fact that he had the power to take someone’s life than that he was forced into a situation where he had to choose. I really enjoyed this book series and I would advise everyone to try it out.