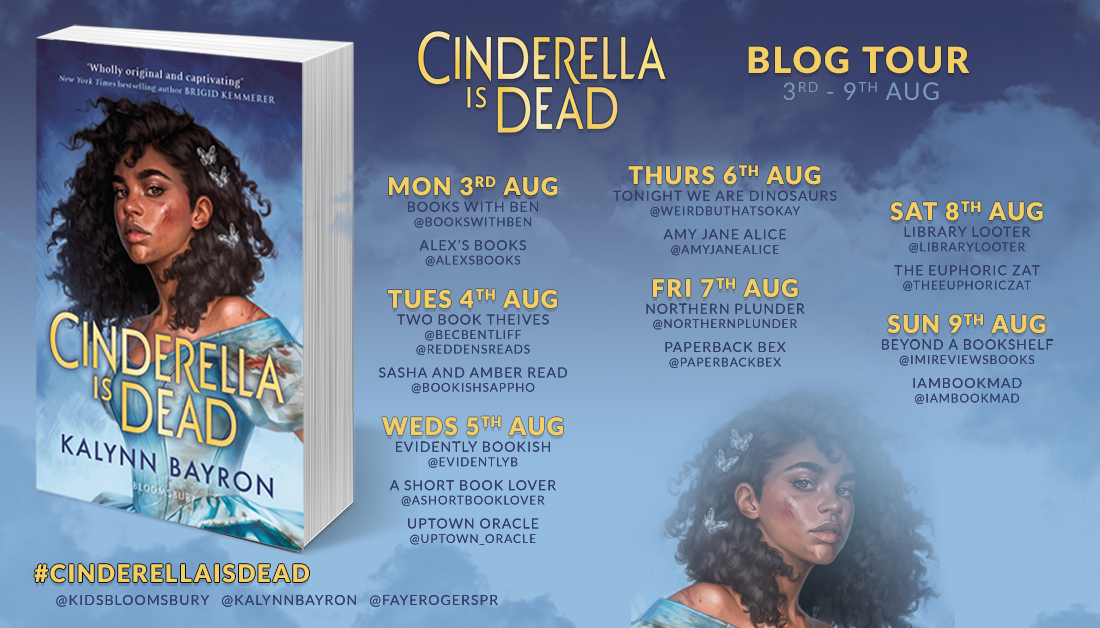 Welcome to my stop on the Cinderella is Dead blog tour!

Thanks to Bloomsbury and Faye Rogers for making a physical copy of this book available to me. This is my first time working with PBT and I have had a good experience so far, so as always check them out if you are interested in finding new and interesting LGBTQ+ books. As always I will include my Review Policy

I have been trying to diversify my reading, and especially by reading fairy tale retelling where the main character is someone I can relate with. This book is a whole different take on Cinderella, I mean I am one of those people who talk about the disaster-to-be, that is wearing glass slippers and not the actual romance of the tale. To see a skeptical person living in the fairy tale world is just my cup of tea. “A thrilling and original twist on the Cinderella story – breaking stereotypes or race, gender and sexuality to create a brand-new YA fairytale and a heroine for our times”

It’s 200 years since Cinderella found her prince… but the fairytale is over.

Sophia knows the story though, off by heart. Because every girl has to recite it daily, from when she’s tiny until the night she’s sent to the royal ball for choosing. And every girl knows that she has only once chance. For the lives of those not chosen by a man at the ball…are forfeit.

Pushed beyond breaking by a society that denies everything she is, Sophia sets out on a journey that will remake her world … into one where SHE gets to choose.

Set in a world where cinderella actually existed and every girl has to bend over backward. In order to comply with the crooked principles of the Kingdom where women cannot voice their opinion or complaint. The Kingdom is ruled by a tyrant king who has perpetuated the idea that men are stronger and they can do with women as they wish. Cinderella is dead but the violence perpetrated in her name lives on.

Every year, there is a royal ball, a few girls are chosen to attend the ball and the hope of their parents is that they get chosen either by the king or by a suitor at the ball. So every parent is selling all they have to make their daughters presentable including having dresses made, looking for magic, and paying stupidly high fees to get dupes of cinderella glass slippers as they hope that their daughter will get chosen.

But, that is not what Sophia wants. Sophia is a young black girl whose eyes are opened to the falsities of the princess’s story. She hates living in the kingdom where she is not treated as a human and she is viciously oppressed by the ruling hand in the kingdom. She also doesn’t want a prince, she wants a princess (Hell Yeah, this is a Sapphic story and I absolutely love, Honestly we didn’t get a lot of the relationship between the two girls but it is fine, I am not mad, I thought it was really cute). She has to go along with it all because she does not want to disappoint her parents or even get them killed because if she breaks the law or the supposed order in the kingdom it would lead to the death of her family and everyone around her.
She attends the ball and some rich ‘asshat’ (honestly, I have no other words to describe him) asked for her hand, which she definitely does not want. She escapes from the palace and she finds herself in Cinderella’s tomb where she meets another girl who is trying to overthrow the king and reveal his smelly secrets.

They both go on a journey to find the fairy godmother who helped cinderella get married to the prince 200 years ago. I mean this book couldn’t be more intriguing, there is necromancy, there is finally a black character in a fairytale, there is a relationship that is forbidden based on the time it was set in, there is also a massive plot twist but more importantly there is a very good conclusion. Oh and did I say a crazy plot twist!

TRUST ME YOU WILL NOT SEE THE PLOT TWIST COMING!

2 thoughts on “CINDERELLA IS DEAD || #KalynnBayron”