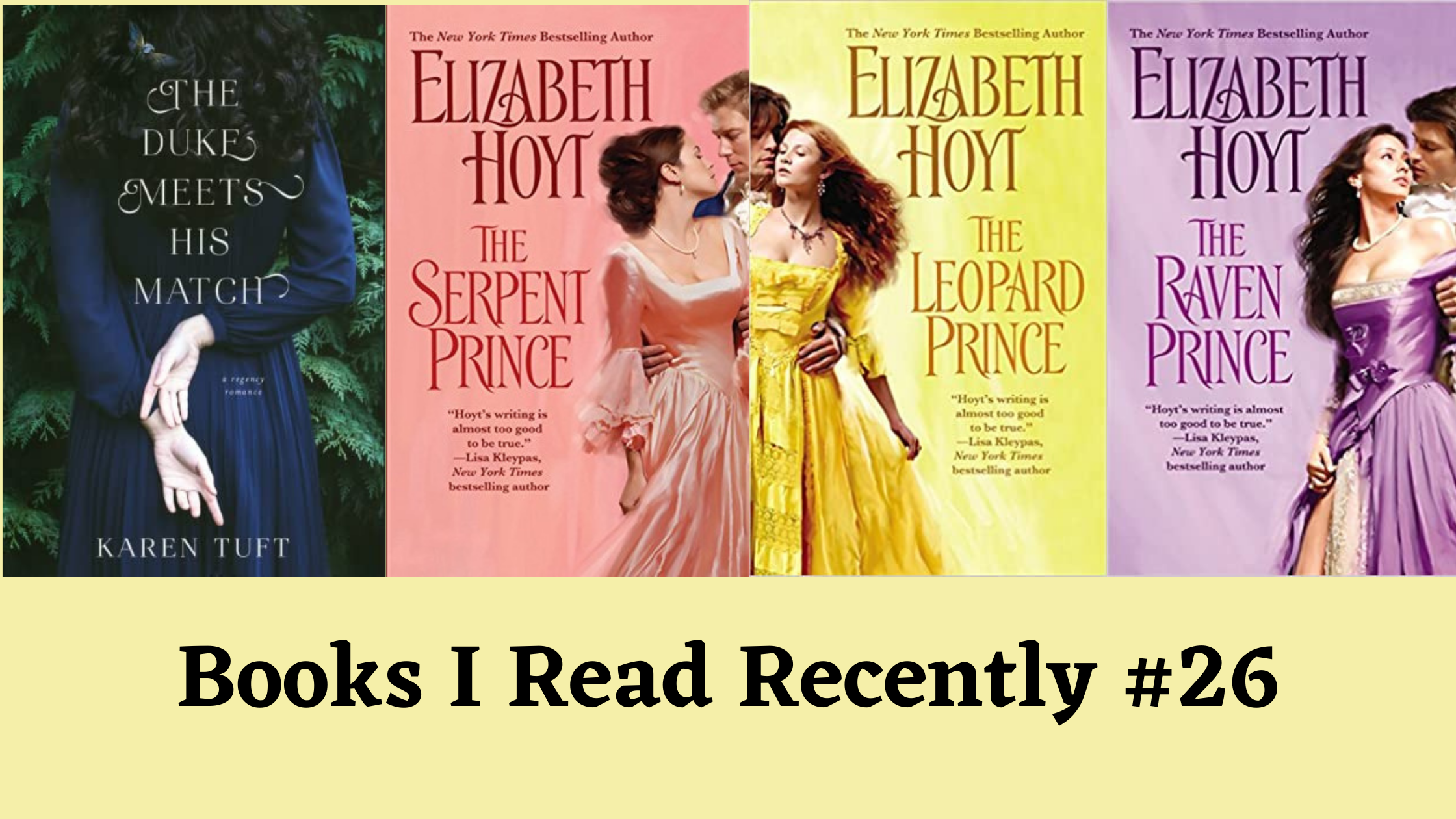 Since I finished reading the BRIDGERTONS BY JULIA QUINN I have been itching to read a lot more historical romance books. I came across a book series of which I had previously read the first book and loved. I read the whole series and I highly recommend them.

The Duke Meets His Match by  Karen Tuft I started this year knee-deep in historical romance. With that in mind, this book’s plot was not new and the characters felt like an extension of other historical romance characters.
The plot can be simply summarized thus; Susan Jennings is your typical wallflower. Her season the marriage mart as long past and she is what you would now refer to as a sinister. She is not looking for love because the last person she was in love with broke her heart. One night whilst hiding away in the library during a society function (a wedding if I am correct), she overhears a conversation and when she is found, the gentleman is an ass to her.

later we get to know more about the gentleman, George, the Duke of Aylesham (correct me). He is now an old bachelor but of course, he is handsome, rich and everything everyone wants. but of course, Susan does not want him.

An accident leads to Susan going to London for a season and this is where she meets George again. Only this time, he is coming to her with a marriage of convenience.

She agrees and then soon find out that they have more feeling for each other than convenience.

The Raven Prince by Elizabeth Hoyt I read this book a long time ago but with the resurgence of my love for historical romance, I decided to read this book series again. Upon re-reading this book, I have bumped up my rating because I just seem to fall in love with it a lot more.

We follow Anna who is widowed and living with her mother-in-law in their small cottage. She is drowning in her lack of finance, as she and her MIL are struggling to make ends meet. She decides to get a job and the one she gets is becoming an earl’s secretary.

Little did she know that the Earl, Edward, is the rude man who had splashed her food with mud the evening prior. When she starts working with the scarred (or rather pox-spotted Earl of Swartingham) who has a bad temper, she realizes why his other secretaries do not last long. But he realises that she is not easy to chase off and she would not take any of his bull.
As it always happens, this firm hand she has makes him attracted to her and her also to him. With her fancying herself in love with him when she finds out that he would be visiting a notorious brothel in London she decides to go there herself. She finds out that other ladies of reputable class also go to the brothel masked to have sex with men without having their identity exposed.

She goes to this brothel and she meets Edward and they have two nights of mind-blowing sex. Soon it is back to reality and she is doing everything to make sure he doesn’t find out that she is the woman from the brothel.

I really enjoyed this book. There was something that just kept annoying me about the stories in this book series. What the hell do they have to do with the main plot? it was so unnecessary in my opinion.

The Leopard Prince by Elizabeth Hoyt Lady Georgina Maitland is very rich, considering the large estates and money left to her by her aunt. She has been referenced a good steward to help her run her lands while she lives her comfortable life in London. But once she sees him, Harry Pye, she knew he was more than a steward. she wanted him (honestly, this fact was one of the reasons I really loved this book and the characters. She knew what she wanted from the beginning and she went for it).

From the very first night they shared in a cabin away from the rain and wreckage of her carriage, she knew she had to be careful of him. When she finds out the rumours about him, she was sure that he was unable to poison sheep and murder the people in the village. Soon everyone was against Harry Pye return to town since he has a dark history with the town’s magistrate.

Even though Georgina knew she would be caught in the crossfire, she decided to go for what she wants. Harry. When she tells him that she wants them to have a sexual relationship, he lays it on the table. Harry would not be subjected to her whims, he would not come when she commands and made her know that.

I am trying not to spoil this book because it is my favourite in the series. I hope you check it out.

The Serpent Prince by Elizabeth Hoyt Simon is a character that we were introduced to in the first book. He was really interesting. To see him in this book and the vengeance he was raining was just jarring and somewhat misplaced. This has to be my least favourite in the series and this is not because the story was bad, it is just because there are so many holes and blanks in my mind after reading this book. I admit I skipped a few pages when things got a bit boring for me.

Lucy finds Simon her trip back home. He is naked and unconscious, he has simply been beaten to the edge of his life. She nurses him back to health and he sees her as an angel. He develops feelings for her and so does she. They have a quick tumble and they get married.

She soon finds out about his revenge plot and how he goes about duelling and killing the men that were involved in the death of his perfect brother. Lucy decides to leave him when she finds out that he has killed people. She is a girl of faith and believes that “thou shall not kill”. Anyways she returns back to her family…
I would let you figure the rest out.