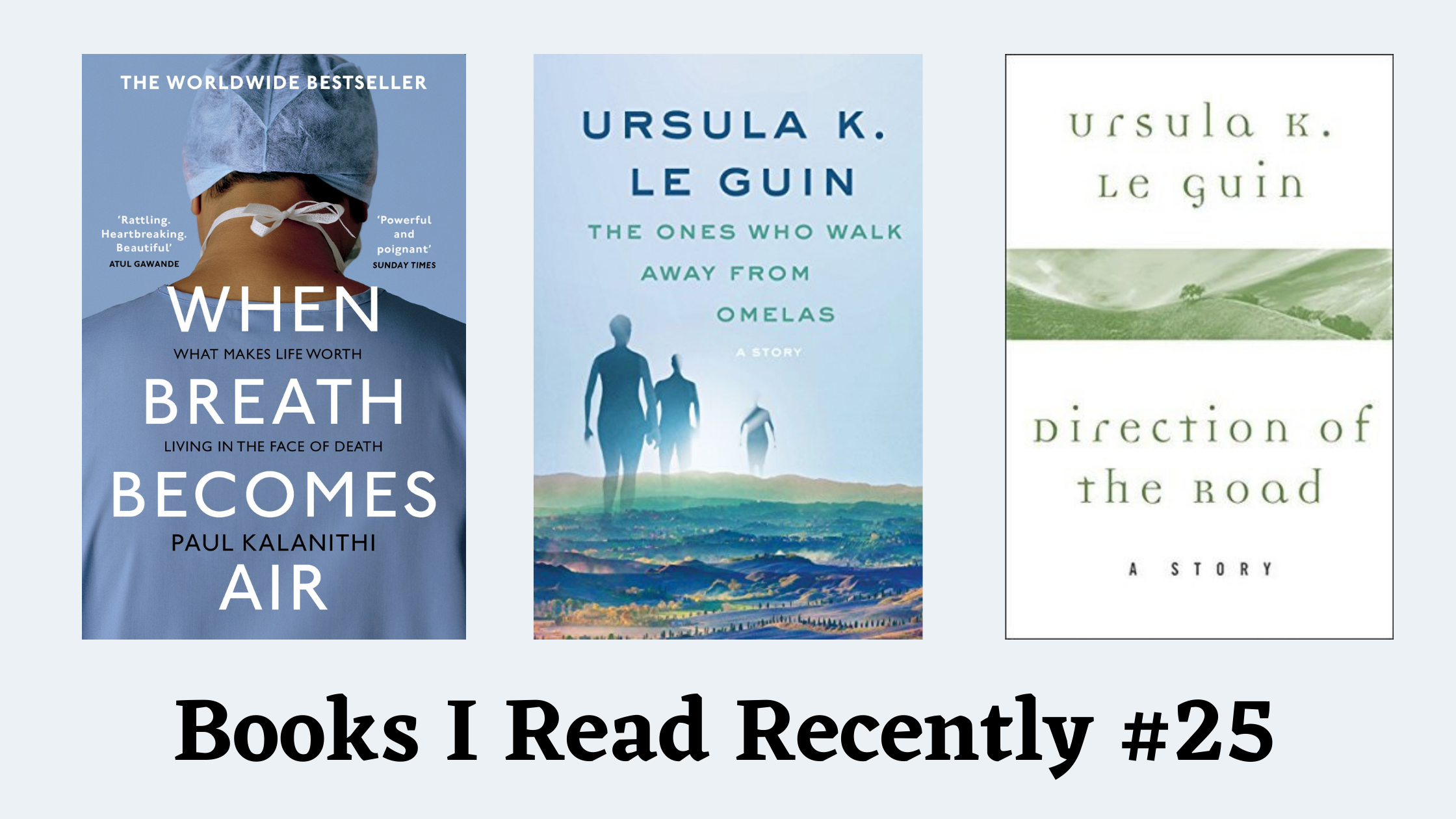 Welcome to another collective review!!

I have been slowly making my way through books that I have had on my shelf for a long time. I started by reading books that Kim Namjoon recommended. I have absolutely loved them. I have read a lot more widely and a lot about psychology and man since this explorative reading of mine started. Here are a few books I have completed since I started clearing my shelf! I have been slowly making my way through books that Namjoon has either recommended or caught reading. This book is one of them. This book is written by the now late Paul Kalanithi when he found out about his cancer diagnosis. Has a Neurosurgeon/Neuroscientist, he lived a life of sacrifice and servitude to the human race. In this book, he tells his journey to become a prominent surgeon that was wanted around the country to a singular man dying in the same hospital he has saved so many before him. He talks about his relationship with the mind and the philosophies that man has created to help understand and expand on the extension of the mind. It highlights the introspective nature of Kalanithi and how he was always able to reflect upon what he really wants and go for it.

I pulled one quote from this book, that chilled me to the bones and has me reflecting on what I really hold dear in life. “My life has so far been about building potential, it might end before I achieve it”. I place the question, what is life without using ambition? without using potential?

Kalanithi reflects upon this in the last months of his life. He felt the urgency of racing against time and he did not have enough time to complete this book. However, I do believe that the nature of this book, is one that cannot be completed. Paul has left behind a wife, daughter, and family who forever makes him exist in this plane of consciousness.

I want everyone to remember “You can’t ever reach perfection, but you can believe in an asymptote toward which you are ceaselessly striving”

The Ones Who Walked Away from Omelas by Ursula  K. Le Guin As I slowly make my way through books that have been recommended by BTS, I finally reread this classic psychomyth. I read this back in 2016, but back then I just assumed that the idea and morality of the story were messed up and that was where my thought process stopped. However, four years have passed and I am glad to say that I am thinking a bit more critically and I have developed a semi-well-rounded identity. I have come to a place in my reading and daily life that rereading this book, brings a lot of my heftiness and moral questions to my subconscious.

Let me start with what a psychomyth is. A psychomyth is usually a thought experiment that fundamentally relies on morality and what the worth of morality really is and the attempt to provide proof of the lack of morality or a moral understanding. However, I will state that Le Guin was not really trying to prove anything with this book but to lay foundations on which moral questions and debates can be laid. Psychomyths are ‘more or less surrealistic tales, which share fantasy the quality of taking place outside any history, outside of time, in that region of the living mind which without invoking any consideration of immortality seems to be spatial or temporal limits at all’

Le Guin’s psychomyth takes place in Omelas a city outside isolated from history, time, and mind. Yet sharing similarities that make it easy to examine and include things from our present consciousness. Omelas is a city that seems to be filled with the joy, calmness, completeness, and perfection that the real world craves. But beneath the facade is the suffering and isolation of a child. Personally, I think a child was used in the case of this myth because children are known to draw heartstrings, would the emotions and anger associated with this book remain were it a middle-aged orange-thief. Should the constant humiliation and deprivation of human rights be justified just because the ‘orange-thief’ has committed the crime of stealing a few oranges. Personally, I do not think so. What if he was a murderer who had killed many? should the standards be changed? Is it a do unto others what you would like to be done to you? Because if so, then a trolley problem is created. Should I kill the many on the tracks and save the one just because I would like that to be done for me, were I in the position. Or should this whole psychomyth be solved with the utilitarian theory of morality, where the most important is the greater good?

Everyone in Omelas knows of the child’s suffering. Some choose to forget about the child and just live their ‘happy’ lives (can they be really happy even when they live with such guilt or are the people living in Omelas unable to feel guilt?). But there are some that choose to walk away from Omelas because they believe what is happening to the child is bad.

To be honest, those who walk away from Omelas are just as bad as those who stay. Here is why I think so. Take the trolley problem, for example, Imagine if the person who had to change the shift decided to walk away and not make any decisions, saving neither five nor one. It’s like walking away to please yourself, to rid yourself of guilt and burden that you have enjoyed. Those people surely have family and friends who they are leaving behind that would keep enjoying the suffering of a child. They are selfish people.

However, what is the more ethical option? Do we save the child and condemn all the people of Omelas? Or do we just keep serving the greater good? There really is no such thing as morality.
One thing to note about the people of Omelas and the perceived helplessness of their situation is best said by Le Guin herself “Yet, it is their tears and anger, the trying of their generosity and the acceptance of their helplessness, which are perhaps the true source of the splendor of their lives” not the suffering of the child.

Direction of the Road by Ursula K. Le Guin Continuing the review of ‘The Wind’s Twelve Quarters’ is my review of ‘Direction of the Road’. A story about the loss of importance as a result of industrialization told from the perspective of an Oak tree. The oak began to feel invisible in a world that moves faster than it does. Not only does its ability to move multidirectional irrelevant, but he is also unable to accept the fact that the fast world headed in one direction would make him insignificant!!!
‘Eternity is none of my business. I am an oak, no more, no less. I have my duty, and I do it; I have my pleasures, and enjoy them, though they are fewer since the birds are fewer, and the wind’s foul. But, long-lived though I may be, impermanence is my right. Mortality is my privilege. And it has been taken from me’
An accident happened, that caused the dying man to see the oak as a symbol of eternity. Even when Industrialization is making the oak see its doom [In a few years’ time when I reread this story, I might have developed a better understanding of the oak or the people in moving fast. Or I might even stand in either position. But, for now, I will remain natural in my opinion of this book]
The Oak is under pressure by human illusions of eternity!!!