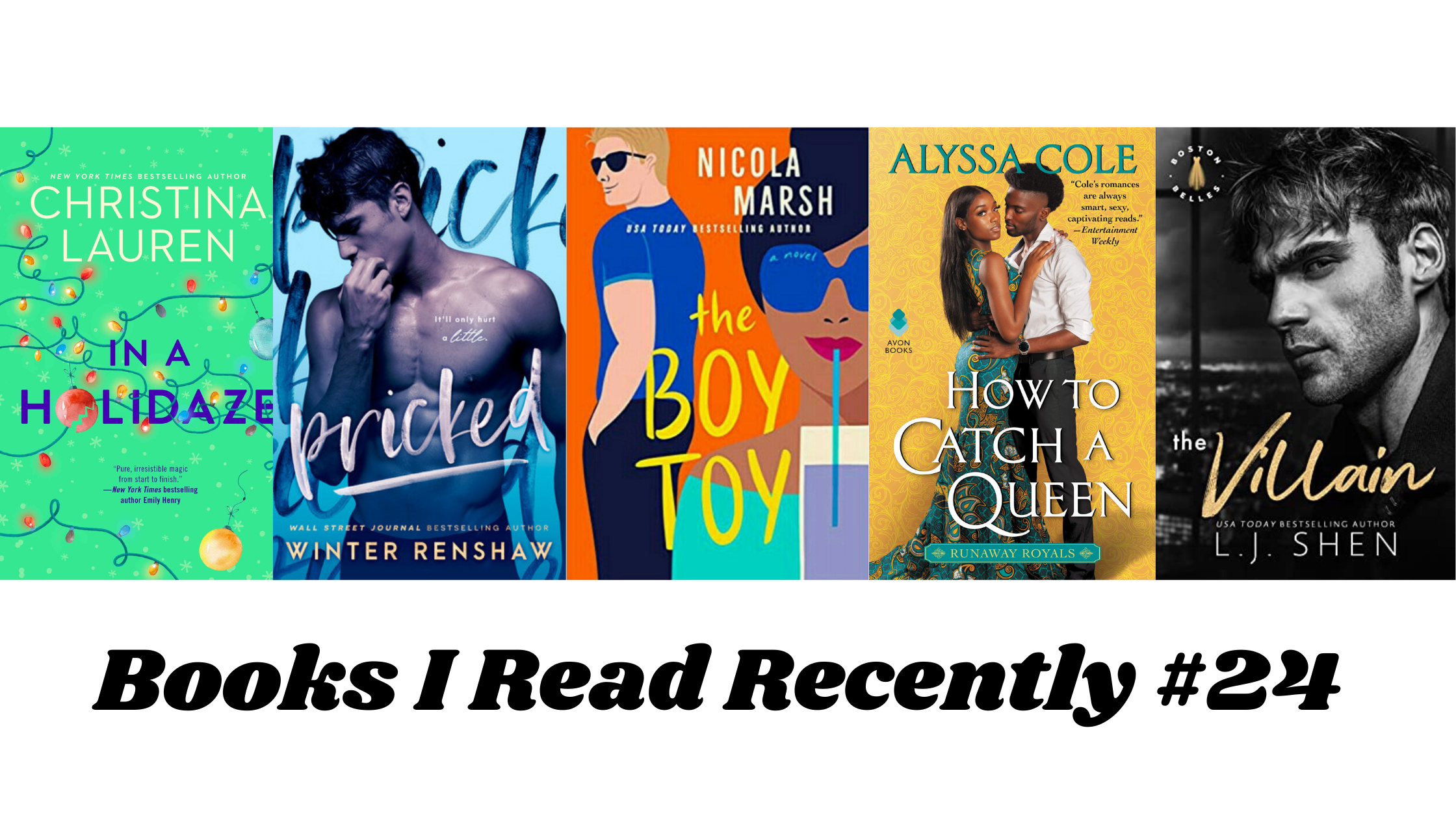 Welcome to another book review!!

Since my last collective book review, I have fallen back into a reading slump. I spend most of my time watching Asian dramas and working the graveyard shifts. My circadian rhythm seems to have changed and I barely have time to pick a book up. These are the books I read between October and now. I am hoping that with the festive season, I will at least pick up a few more books before the end of the year.

Here are some romance books, you want to check out.

The Boy Toy by Nicola Marsh After a heartbreaking dissolution of her marriage, Samira is back home in Australia to help her cousin at her new practice. Samira is a 37-year-old with a great practice in LA and has used every opportunity to avoid going to visit her mother in Australia. Most of her fears come from the fact that revisiting only brings to the surface the failure she is in the sight of nosy Indian aunties and uncles. Also, she does not want her mother to be ostracized by the Indian community again. Since the last time, Samira was cheated on by her husband after he left to marry the young girl he had gotten pregnant. Samira has always felt sad because of her inability to get pregnant but at this point in her life, she has decided to just give up and live life to the fullest.
Which does not stop her mother from trying to set her up with any single Indian man on her radar.
On getting to Australia she goes to a bar where she meets Rory. Rory is an Australian stuntman (so essentially he is a walking sex god) who is trying to get into an acting role. Anyways they end up sending the night together and of course having extensive sexy sex. Anyways, soon they meet again only this time, she is to be his dialect coach.
I really enjoyed this book, and I thought it was well planned and paced. I do not want to give more spoilers Brighton walked into the tattoo shop to get a tattoo just to prove to herself that she can do things against her mother’s wishes. What she didn’t anticipate (other than the fact that she didn’t fit in) was Madden the owner of the shop. She askes him to give her a tattoo of his choosing. Shen then proceeds to start a conversation about his lack of tattooed even when he is the artist.

Madden is not the conversational type. She is ignored but that just seems to get her more interested. Anyways, (trying not to spoil the book) She is from a rich family and her parents want her to go to med school or something like that. She doesn’t want that but she is trying to find a way to defy her parents when all her funds and daily expenses are given to her by her parents.

A circumstance brings her back to Madden and sparks fly better the two of them. She ends up moving out of her parent’s mansion and into Madden’s small apartment. They seem to be managing alright until something came (as it usually does in romance novels) that caused them to go apart and her to go back to her parents. She finds out that she is pregnant…

How To Catch A Queen by Alyssa Cole BUT
Njaza is known for its silent Queens. Shanyu’s father married so many wives hoping to find the ‘True Queen’ (whatever that might really be) but he never found her and all the woman who came to the palace has Queens had to leave at one point when they were deemed unworthy. Shanti didn’t know this until she was in the thick of it. She was married to the King of Njaza but he never once visited her. First, she told herself, it was because he was mourning his father but that was revealed not to be the case. The sparks between them make it clear that he is staying far away from her, to prevent himself from falling too deep for her and having to lose her just like he lost all his father’s Queens he was able to develop a relationship with. After an outburst, he goes to her to ask for her help and they soon begin to brainstorm ways to bring NJaza into the new age and make his voice heard as the King. And as you can expect, they have SEX!!!!!

In a Holidaze by Christina Lauren This book was right in the middle for me.
Here we follow Maelyn who has caught herself in a loop after making a wish. Every year Maelyn and her family spends Christmas with their family friends at a snowy cabin in Utah. This means every year, she sees her crush Andrew, who she still cannot tell her feelings. Unfortunately, a game involving eggnogs results in her making out with Andrew’s brother Theo. Andrew happens to see them together and he makes a joke about it and basically wishes them well.
Maelyn is not happy about this and Theo is distancing himself from her (she pushing him off her was all the indication he needed about her nonexistent feelings for him).
With Andrew’s family stating that they are selling the Cabin because of financials, this Christmas seems to be the last they would share together. Maelyn fears that she has missed her chance with Andrew and everything that felt stable in her life was going to the gutter. So on her way back home she makes a wish just before getting into an accident with her family.
When she wakes up, she finds herself on the plane going to Utah all over again, just like the last week never happened.
Over and over again, this happens and she begins to feel that maybe her wish was going to come true.

Like I said this book is just in the middle for me. I do not think I will be reading it again. Unlike other Christian Lauren books, this one was just Okay.

The Villain by L.J. Shen L.J. Shen never disappoints with her romance.
This book is just so good. Nothing saying that the relationship was toxic as fuck, because it was, the most important thing here is that the toxicity of the romance was well written.
We start this book at a wedding where our main character, Persephone has poisoned herself with some flowers. She is saved by her cold-blooded, large age-gap, longtime crush Cillian. (I mean is nickname is Kill). Cillian gets her naked and into a bathtub and saves her life. She blurts out that she wants him and he ignores her but it was enough to leave a massive imprint in his mind and pants.
Anyway, a few years back Persy’s aunt told her that she could have one wish that she would fulfill and Persy decided that she would wish for Cillian.
“I wish you’d fall in love with me s hard you won’t be able to think about anything else. To eat. To breath.”
He tells her that would never happen and she should go find a boring man who she will marry.
Years later she is alone, her husband ran away leaving her in debt, with criminal debtors at our door. She has no one else to turn to but to go to Cillian.

The last thing she expected was for Cillian’s condition to involve her getting married to him!
I will try not to spoil this book. I quite liked how Cillian’s illness was imbibed into the story and how his grip hold on his emotions was important for his health. He was not just an asshole with an inability to feel and express emotions.

I hope you check some of them out.