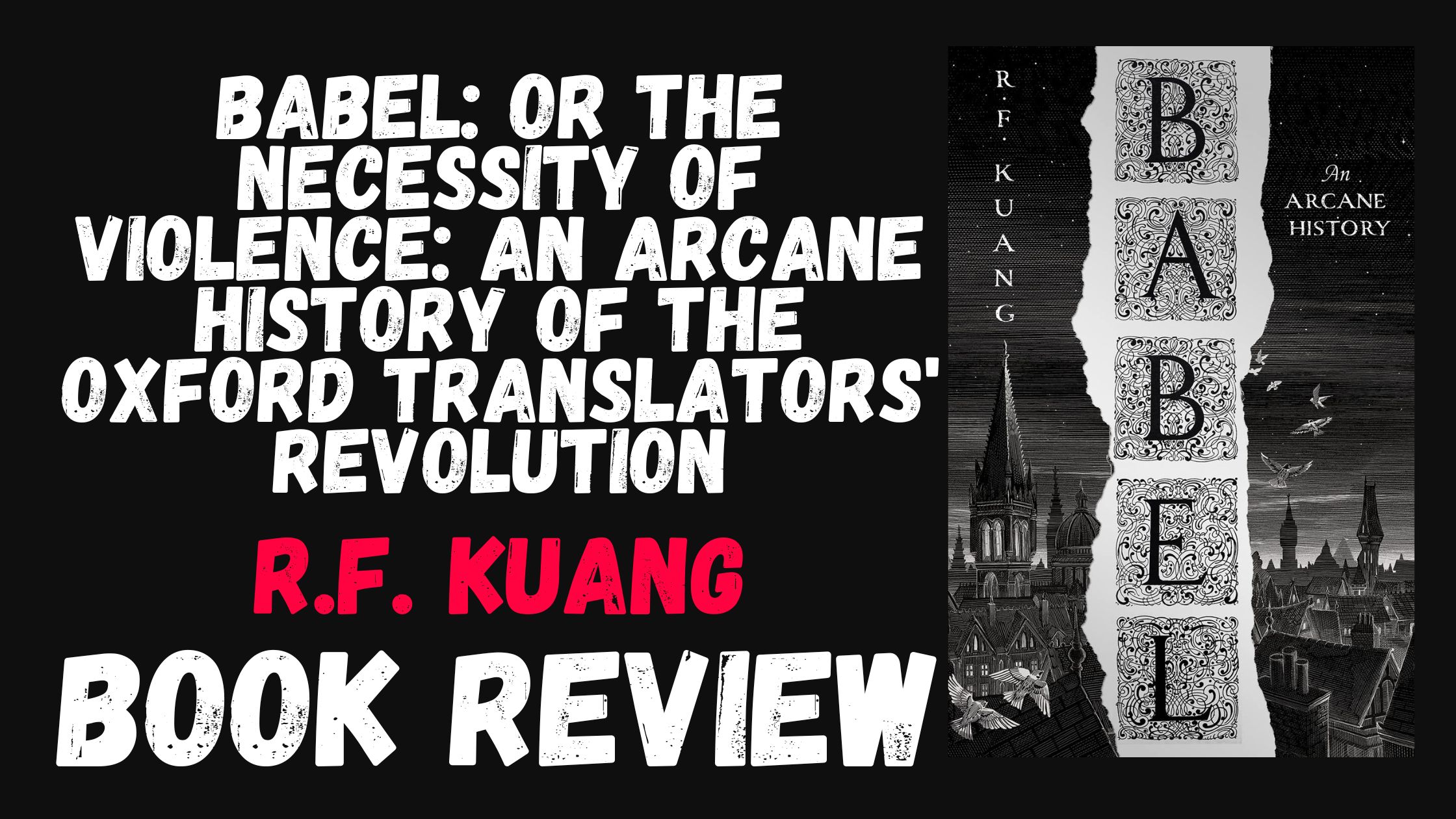 Here is the part two of my review of Babel – just sharing some of the things I thought about the themes presented in this book. Please check out PART ONE if you have not yet!

*Thanks to the publisher for sending an ARC of this book to me.

Title: Babel: Or the Necessity of Violence: An Arcane History of the Oxford Translators’ Revolution

Typically when I read fiction, I tend to view the ideas and characters presented in the larger scheme of things. Because no matter how hard we try to dichotomise literature, there is always truth in the fiction and fantasy. I have broken down my thoughts on 4 main points;

Take for example, the role people in diaspora (like myself) play in promoting Britain today. We travel from our home countries for ‘greener pastures’ (immediately insinuating that there must be something wrong in our countries – which in most cases there usually is; and it tends to be the fault of the west propagation in said countries – and that in some way Britain can offer us something that our countries can’t; thereby selling the idea that Britain is better than our homes). We take our intelligence, resources, language, culture and identity and using that to fuel and push Britain’s imperialism. And this is me speaking in 2022; this is not a fantastical archaic construct but something that is happening today. This is one of the reasons, I say Kuang is a genius. This book obliterates the dichotomy; setting and blending history, current day politics by exploring the power of language.

Kuang said “Language is an infinite resource” and just like every other commodity, it is subject to capitalism and looting. Take for example; Babel is an organisation, which has its own personal gains such as making silver works that will only last a while so that consumers can keep coming to ask for repairs, thereby making money; but they also create silver works with match pairs that can level an entire country, guns that fire so many rounds, ships that sail fast etc. These match pairs that they use employ words from countries that they plan to use their products against. They bring over students from all over the world to translate languages to English but that in itself is a “Betrayal. Translation means doing violence upon the original, means warping and distorting it for foreign, unintended eyes”. Imagine translating the sacred words of your people for the empire to use it against your home.

I think the funniest (not really) part of this book was when the Chinese reverse uno-ed the British. There’s nothing that those Chinamen want, apparently, except opium”. The British want China’s Silver but the Chinese want nothing from the British; so they flood Canton with Opium, which the Chinese government is cracking down on; when the Chinese show their power and independence, the British cannot handle it! It is the kind of political mind game I love it see. I mean you can still see it today; with the Chinese great firewall and the tight grip that the CCP have over China; the West cannot!

This book does a great job exploring not just patriarchy as a construct but how it is being upheld by eurocentrism. Eurocentrism can be defined ‘as an attitude, conceptual apparatus, or set of empirical beliefs (which means that there is a vast evidence of experiences to back it up) that frame Europe as the primary engine and architect of word history, the bearer of universal values and reason, and the pinnacle and therefore model or progress and development (Sundberg, 2009).

Take for example Letty, her character was such a good portrayal of how Eurocentric white female fragility is employed as a tool to subjugate and ‘enslave’ people. Sure she was going through a lot of things, some would argue that she was blinded by her pain and yes, I understand but it felt like her pain took priority over others. She was quick to rely on her fragile helplessness when her voice and power as a privileged white woman was required. She could not understand why her friends where not happy; she could not see that while slavery was abolished, her Black roommate was still not allowed to use the communal toilets; she mentioned all the charity and humanitarian works that are being done without considering that the need for those charities arose because of the empire.

Furthermore, she did not consider (honestly, she could not fathom) all the ‘civilizing missions’ aimed at making Aboriginals behave like proper Christians was a form of subjugation [Honestly, this is one of my issues with Christian missionaries who go into Indigenous communities where their presence is not wanted!]. They believe they are the moral standard and everyone else need to follow. It was all just confusing to Letty, and the patriarchy is banking on that confusion!

They abolish slavery but still sell ‘chattel’ silver bars that are used in chaining slaves. The call for abolition went on long before the emancipation act was published; so what did they do differently, what changed the mind of parliament. It is definitely not because they had a change of heart or they gained some moral perspective, no, it is because it was hurting their bottom line. Even when people took to the British public about the horrors they were experiencing “They needed to see how grotesque it was. And even then, it took them decades to finally outlaw the trade” and why is that?! because it had not hurt the bottom line enough!

THE NECESSITY OF VIOLENCE

An Arcane History of the Oxford Translators’ Revolution