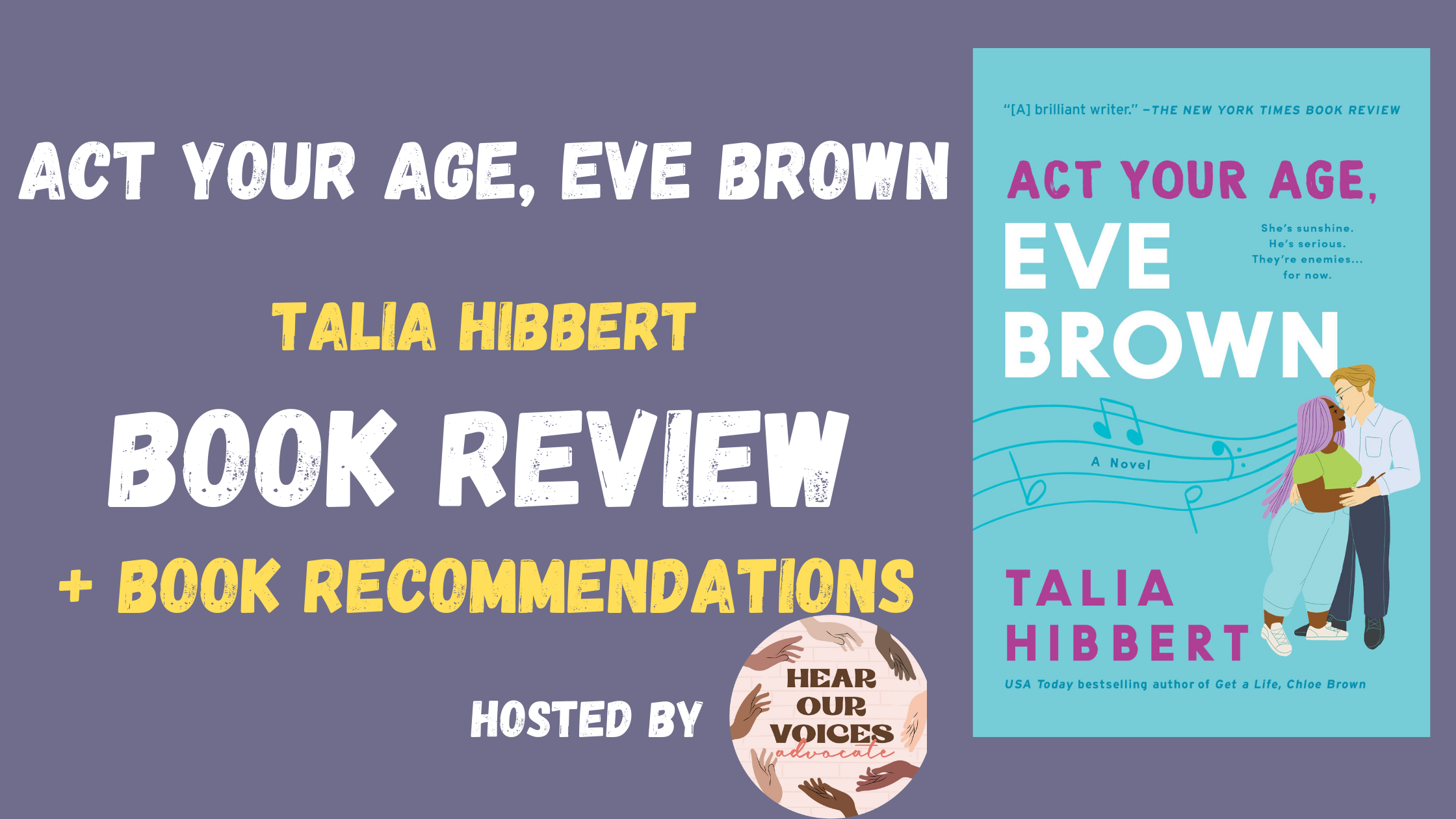 Welcome to my stop on the blog tour!

Thanks to Hear Our Voices for hosting this tour and Harper Collins for providing this book via Netgalley.

As someone who have read the first two books in the series, GET A LIFE, CHLOE BROWN and TAKE A HINT, DANI BROWN I am so happy to be partaking in this tour. The representation that Talia Hibbert has provided all through the series has been fantastic. It is always amazing for people to see themselves represented in books. It is very enabling.

With that said, I will be reviewing Act Your Age, Eve Brown and also would be including a shortlist of books with BIPOC, LGBTQIA+ and Neuro-Diverse Characters!!! Eve Brown is a certified hot mess. No matter how hard she strives to do right, her life always goes horribly wrong—so she’s given up trying. But when her personal brand of chaos ruins an expensive wedding (someone had to liberate those poor doves), her parents draw the line. It’s time for Eve to grow up and prove herself—even though she’s not entirely sure how…

Jacob Wayne is in control. Always. The bed and breakfast owner’s on a mission to dominate the hospitality industry—and he expects nothing less than perfection. So when a purple-haired tornado of a woman turns up out of the blue to interview for his open chef position, he tells her the brutal truth: not a chance in hell. Then she hits him with her car—supposedly by accident. Yeah, right.

Now his arm is broken, his B&B is understaffed, and the dangerously unpredictable Eve is fluttering around, trying to help. Before long, she’s infiltrated his work, his kitchen—and his spare bedroom. Jacob hates everything about it. Or rather, he should. Sunny, chaotic Eve is his natural-born nemesis, but the longer these two enemies spend in close quarters, the more their animosity turns into something else. Like Eve, the heat between them is impossible to ignore—and it’s melting Jacob’s frosty exterior.

I really loved reading this book. Eve Brown is a character that I have been really interested in since the first two books. Especially since she was portrayed as the highly sexed sister whose words never come out the way she intends. Reading a book about her was just so climatic.

At the beginning of this book, she has a confrontation with her parents which leads her to drive far away from home hoping that she would start a new life and at the same time prove to her family that she is can hold down a job and is not a failure. That is when she walks into an interview for a Bed and Breakfast Chef. The owner of the BnB does not like her and he cannot help but say exactly what is on his mind. Jacob is Autistic and he lets her know that on their first meeting. Since his eyes could barely drag themselves away from her breasts, she teases him. Jacob almost explodes in rage, but Mont his friend advised him to employ Eve.

With Eve already sashing her gorgeously thick ass out the door. They both have to run after her. Long story short, Eve hits Jacob with her car which results in him being concussed, his arm broken and in the hospital.  Now, she had to hold down the fort, basically. When Jacob wakes the next morning to find her following all his rigid safety rules and making his guest comfortable, he is surprisingly thankful.

They are honestly the most balanced couple in the romance world. The fact that Jacob is autistic and speaks his mind, matched well with Eve who favours speaking her mind and appreciates when people are blunt. A small spoiler, Eve realizes that she also has autism and being together helped her understand herself better.

The sex scenes!!!!!!!!!!!!!!!!!!!!!!!!!! I am trying not to sound like a deranged person because they are both too hot for their own good. To be honest, it was more the chemistry between the two of them than the actual sex. Eve knew exactly what she wanted and Jacob was willing to try. It was never about taking either of them out of their comfort zone. It was more about making sure they enjoyed themselves in their comfort zones.

This book was just perfection.

This would be a very short list of books that just continue my vibe from this book. I have outlined three categories of books that I am recommending.

When I started reading books, there was this realization that I had. There are very few books with Black characters that are happy in relationships and not just comic relief or the wise friend. With that in mind, I focused on finding Black writers or POC writers that write amazing POC-JOY books. Here are a few;

How to Catch Queen by Alyssa Cole

The Trouble with Hating You by Sajni Patel

The Kiss Quotient by Helen Hoang

Romancing the Duke by Tessa Dare

Death/Love at the first meeting

As Eve hit Jacob with her car I thought it would be nice to include a few books that start with a dangerous situation or a mouse-in-the-trap situation. Kiss My Cupcake by Helena Hunting The Invitation by Vi Keeland Talia Hibbert is a USA Today and Wall Street Journal bestselling author who lives in a bedroom full of books. supposedly, there is a world beyond that room, but she has yet to drum up enough interest to investigate.

She writes steamy, diverse romance because she believes that people of marginalised identities need honest and positive representation. Her interests include makeup, junk food, and unnecessary sarcasm. Talia and her many books reside in the English Midlands.