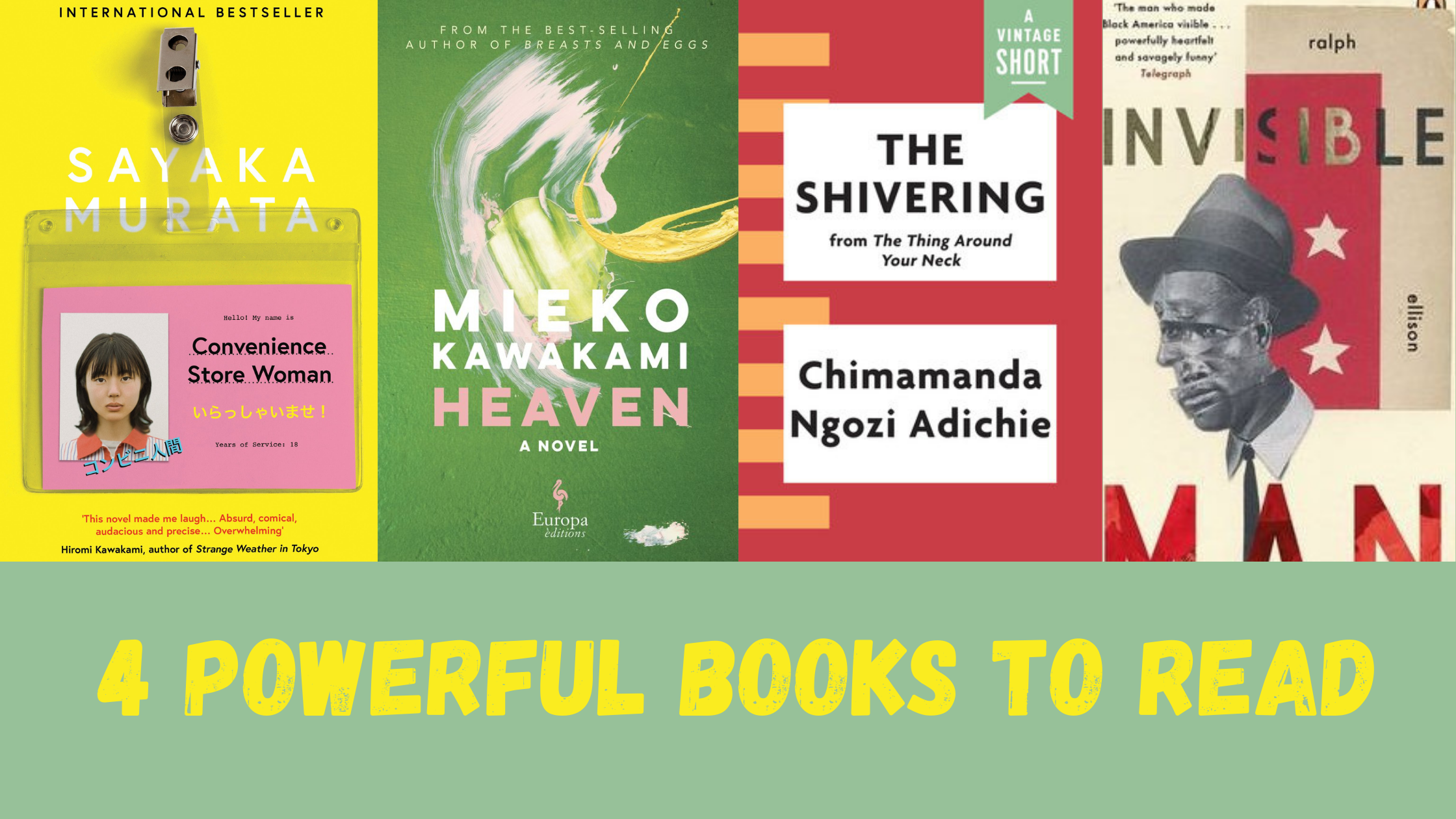 All the books I review in this post are books that I highly recommend you read at least once. I have fallen in love with Meiko Kawakami writing style and the depth her characters have. This feeling and humanity of characters is one that I think lots of Japanese authors have the ability to create. I also review the now-classic Invisible man.

The Shivering by Chimamanda Ngozi Adichie

This is a short story that follows Ukamaka starting on the day the former first lady of Nigeria, Stella Abebe Obasanjo died, 23 October 2005 which also was the same day Bellview Airlines Flight 210 crashed. Ukamaka was so afraid that her now ex-boyfriend was on the flight. Until she opened her door to another Nigeria was happened to be living in the apartment complex and was wearing a Princeton shirt. They prayed together and that was the start of their friendship. This story encapsulates the lives of immigrants in the United States and their hopes and aspiration.

Reading this story just takes me back to when this happened. I remember it so clearly even though I was only about 8 when it happened. The whole country was gloomy. I mean there were rumours that the first lady died because of a tummy tuck which means she could afford to go spend so much money while a plane crashed because of the failure of the airline company to provide key safety information to their pilots. This even led to the United States FAA criticising the FAAN for failure to enforce safety regulations. I mean it could have been avoiding and claims were that the National company was unable to get funds from the government. So you can understand the public outrage on this day when the evidence of corruption was plain for everyone to see A short story that packs such a powerful punch.

Before I start with this review, I have to state that her writing style is quite similar to that of Haruki Murakami whose works I really enjoy because of his ability to not shy from describing things either as they are or what he perceives to be imaginary but has a way of relating to the reader. So if you like Haruki Murakami then I can promise that you would really enjoy this book.

Told from the perspective of a 14-year-old boy who has been tormented his whole life because of his lazy eye (or at least he thinks that is the reason he is being bullied). He has been bullied for years by his classmates and rather than report it (not that it is always easy) he chooses to accept it and thinks that he is deserving of the beating he gets even when he does not know why (Even he wonders, ‘I have never done anything to you guys’) That is until he receives a letter from another classmate of his, Kojima who happens to be going through the same has him, expect she is supposedly being bullied because she is dirty. Being dirty or acquiring clutter has been a coping mechanism for her who has always lost everything.

They both create a traumatic bond as they unite in the similarities of their circumstance (Honestly I think they both becoming friends was almost more trouble than it was worth. Yes, they provided solace for each other but they both led to each other psychotic break.). Anyways, as their friendship grows, they go on trips and Kojima takes him to a place she calls Heaven which happens to be a painting (will avoid further spoilers).

I do think that rather than Heaven being a thing or a place or something physical, it is a circumstance. /The two friends looking at a painting without the being joke or object of pain is in itself Heaven/ (but I might just be overthinking things, which is just to show you how fantastic a writer Meiko actually is).

I hope you check this book out. Trigger warning for Self-harm, Bullying, death and psychosis. “I am invisible, understand, simply because people refuse to see me” is probably the most popular quote from this now-classic novel following an unnamed African-American man from the South trying to live and adapt to how people and things are run in the North after he was expelled from school because he took a white man to ‘where he wanted to go’ instead of showing him ‘what people wanted him to see’
.
This book explores power imbalance, sexism, betrayal, racism, slavery, Harlem race protest/riots, women rights, sex, education and classism, brotherhood and manipulation.
.
Ellison command of storytelling and words, emotional exploration, racial tension is just amazing 👌. We follow the protagonist from a teenage with hopes and aspiration to contribute to society to be a pillar of hope for black people in American to how he ends up living underground and stealing electricity from a society that seems to have taken so much from him that is invisible to it.
.
It is a fascinating read and I hope everyone reads this book at least once in their lifetime. Follows thirty-six-year old Keiko Furukura who all her life has been perceived as strange in society and has adapted to society by mimicking it. She has become a mirror for society and society has the audacity to call her strange (it’s ironic isn’t it). Anyways since she was in high school she also has always found the world has strange, she was taken to therapists by her parents and she was generally well-loved by her parents. Although I have to say that they never really understood her. I think it got to a point where they all just seemed to stop trying.

After school, she started working full-time at “Smile Mart” a small corner convenience store (if you are in the UK, it is almost like a Highstreet shop basically). She worked there from the age of eighteen and did not feel the need to progress or look for another job. She felt comfortable there and has built a routine. But the world did not see it that way. Her ‘friends’ would ask and she would say the lie she and her sister had formulate That she was sick and could not work hard which was contrary because she had to be on her feet for long at the mart.

Anyways she decides to go with the flow and marry a man and do the things society expects from her, only that she could not. She felt unable and uninterested. She left her job at the supermarket and had a man sleeping in her bathroom but it was bland and not as exciting as the world made it seem. All the things the world was trying to cure are off was really the best things about her.

You eliminate the parts of your life that others find strange – maybe that’s what everyone means when they say they want to “cure” me, so it really isn’t about you. It is about the world.

I really enjoyed reading this book about a woman that appears different but only reflects the world. I highly recommend it.